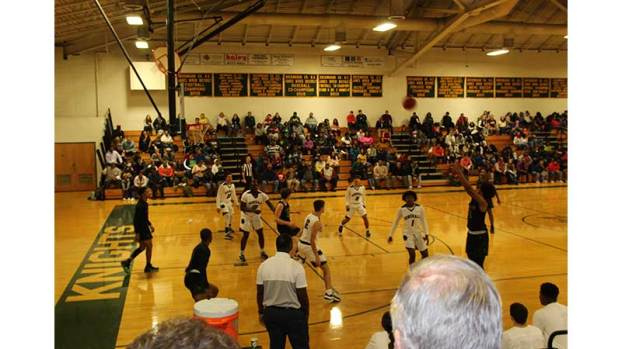 This picture provides a glimpse from the stands of the undefeated Buckingham County High School (BCHS) varsity boys basketball team in action during the BCHS Holiday Classic on Friday, Dec. 27. The Knights won this game 55-30 against William Campbell High School. (Photo by Cam Johnson)

Buckingham County High School’s (BCHS) varsity boys basketball team has closed out the 2019 portion of its regular season schedule with an 8-0 overall record after sweeping its competition in the BCHS Holiday Classic.

“It’s a start we wanted to get off to,” Knights Head Coach Taylor Boyers said of his team’s undefeated run so far. “I’ve been really pleased with our effort, with our energy and how quickly we’ve come together as far as a team. We’ve got really good chemistry. … The way we play defense, our guys like playing defense, and we take pride in that.”

“We got off to a really good start last night,” Boyers said in a Sunday, Dec. 29, interview. “I think we went on a 12-0 run to open the game, and then we hit a little bit of a lull towards the end of the first quarter and the second.”

“I didn’t think we played our best basketball in that first half, and we kind of challenged our guys at halftime,” Boyers said. “We came out, played really well in the second half, outscored them 31-15 and just really focused on the defensive end in that second half.”

On Friday, Dec. 27, the first night of the BCHS Holiday Classic, the Knights won 55-30 against the William Campbell High School Generals.

“We played really well against them,” Boyers said. “Defensively, I thought we played really well, and that’s been the key for us all year. The offense is going to come throughout the season, but defense is what we’ve got to hang our hat on.”

Making the all-tournament team for the Knights were Holman, Amari Toney and junior forward Xavian Gough.

Buckingham returns to action in 2020 on Friday, Jan. 3, when it hosts Amelia County High School at 7 p.m.

Reflecting on January’s schedule for the Knights, Boyers said, “It’s going to be a tough stretch for us. We go to some tough places. We’ve got a lot of road games. We’re right into the teeth of district play, so we’ve gotten off to the good start that we wanted, but we have to keep working and keep improving.”

Elam will play lacrosse for Pitt

Kate Elam, of Pamplin, will be taking her lacrosse talents to the University of Pittsburgh next year, a decision she... read more