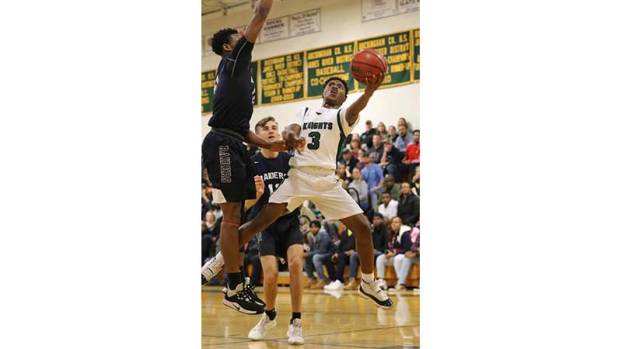 Knights fall 53-47 to Raiders in rematch

The Knights won the first showdown 68-67 on Jan. 8 in Appomattox.

Reflecting on his team’s performance Jan. 24, Buckingham Head Coach Taylor Boyers said, “I thought our guys played really hard. That’s never an issue with this team. They always compete. They always leave it on the floor, but as a team we just didn’t execute efficiently enough to win.”

He noted that a few possessions particularly late in the game needed to feature better execution from the Knights.

“In a tight game like that, every possession in the fourth quarter is so valuable,” he said.

Boyers described the contest as back-and-forth all night.

The Raiders held a 12-5 lead over the Knights for a stretch in the first quarter but recovered and led 24-23 at halftime.

“Appomattox had a better third quarter, but then we answered right back and went on a small run to tie it at 43 apiece with 1:30 left (in the game),” Boyers said. “It was really either team’s game at that point. They made a few more plays late than we did. They knocked down free throws late when we fouled, so give credit to them.”

He noted that Appomattox, which features some members from the school’s state championship-winning football squad, is a good basketball team.

“They came in off a big win over an undefeated Halifax team, so we knew we were going to have to play our best,” he said.

“That game had a playoff-type atmosphere to it,” Boyers said. “We had a packed house and great fan support. Playing in those type of games is only going to better prepare for the postseason. We did some good things, and we did some things that we have to work on. We’ll learn from it as a team, work to improve those areas and come back better from it.”