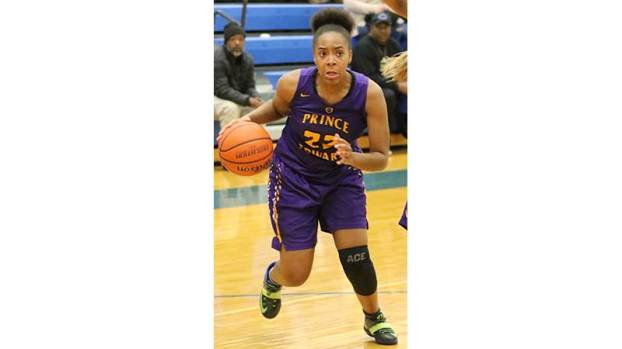 Prince Edward County High School junior DiNasia Scott is a go-to player for the 2019-20 Lady Eagles and one of her team’s captains. (Photo by Titus Mohler / Herald)

‘It is truly going to be a team effort’

The Prince Edward County High School varsity girls basketball team has begun the post-Da’Mya Harris era and found some success even as it searches for its future leaders.

“This year it is truly going to be a team effort; everybody is going to have to contribute in our success,” new Lady Eagles Head Coach Kimberly Price-Chambers said. “Right now, we are playing several players in the post position and waiting to see who is going to establish themselves as a force in the middle.”

Harris was a staple in the Lady Eagles’ starting lineup for years, providing scoring, leadership and ball handling. Madison Lehman was a key presence in the paint, and Carlton Redd provided steady leadership on the sideline as head coach.

During the 2018-19 season alone, this trio and more led the Lady Eagles to a 15-5 overall record, including an appearance in the Region 2A tournament.

Harris and Lehman graduated, and Redd opted to move on, but Prince Edward is pressing on with some notable returners and Price-Chambers, who brings experience and high standards.

“I have been head coach for the middle school girls’ basketball team in Buckingham for two years,” she said. “Although, this is my first year being the head coach for (the) Prince Edward girls, something I always try to bestow in my student-athletes is accountability and leadership on and off the court.”

The 2019-20 Lady Eagles are comprised of five seniors and five juniors and have started the season 3-3.

“Our performance could be better, but the team has been working hard to develop cohesiveness on the floor,” Price-Chambers said. “Since, we lost most of the starters from last year, we are young and working to come together as a team.  I am looking for my seniors to step up and assume leadership roles.”

Among those seniors are DiNasia Scott, whom the coach described as a take-charge, go-to player and good defensive anchor; Ke’Mya Rux, whom the coach said brings energy and enthusiasm as a scorer but is recovering from an injury; and Kayleerae Folz, good on both offense and defense.