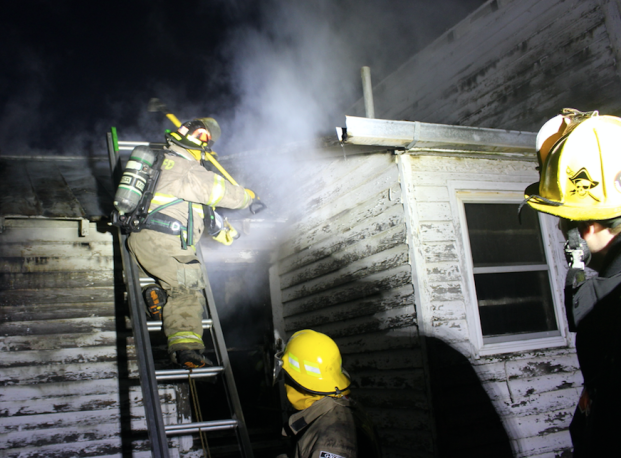 Firefighters work to extinguish a chimney fire that spread to the back room of a house located off Abilene Road early Monday morning, Jan. 6, in Farmville. (Photo courtesy of Dan Pempel)

Hampden-Sydney Chief L.W. Gilliam said his department was notified of the incident at 5:34 a.m. and was the first on scene.

“Our first arriving unit was Truck 2, arrived to find heavy fire pushing out of the (back) side of a balloon-framed structure,” he said. “Crews made an interior attack for a possible search for a victim. No victim was found inside the structure.”

He later noted that three people were ultimately displaced by the fire.

“We had water on the fire within three minutes of getting on scene, and we had it under control within 20 minutes,” Gilliam said. “… The fire was contained in the kitchen. It basically burned an addition off the back of the house. Pretty much the house is unlivable, but if they wanted to rebuild it, they could rebuild it.”

“Farmville and Meherrin showed up for tanker support because in that area, you don’t have fire hydrants,” Gilliam said.

He cited that the cause of the fire was the wood stove in the kitchen.

In summary on Monday, Jan. 6, Gilliam said that firefighters on scene “had a heavy overhaul, and basically we were out of there by 9 o’clock this morning.”