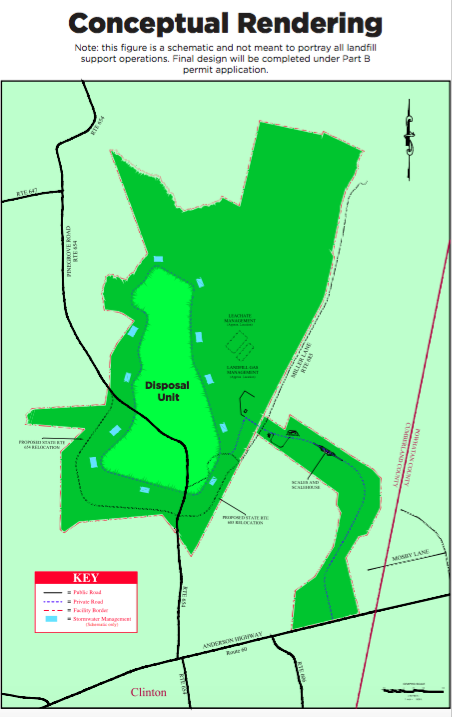 The new rendering shows Green Ridge’s plans to do away with the eastern fill portion.

The Green Ridge Recycling and Disposal Facility is preparing to submit its Part A application to the Virginia Department of Environmental Quality (DEQ). Updates to the proposed landfill include a change in ownership of the company that owns the facility as well as plans to reduce the fill area by half of its original size.

The original Community Host Agreement for the landfill was approved in August 2018.

Jay Smith, a representative of Green Ridge, stated that over the past year and a half engineers for Green Ridge have been doing design work and putting together Part A of the facility’s DEQ application.

Smith cited that the application will now reflect a dramatic change in the blueprints of Green Ridge, reducing the facility’s fill area by more than half.

A primary reason for this change, Smith stated, was to minimize impact to county residents and the environment.

“As we began to do the design of the site, we were looking for ways to minimize the impact while still having a financially viable project … This was a way where we determined we could do something that still made financial sense while reducing the impact to the environment and the community,” said Smith.

A part of the engineering work that went into the Part A application to DEQ involved the study of water flow and creek beds in order to preserve any local wetland areas. The elimination of the eastern fill area, according to Smith, has also brought the number of primary impact wetland acres from 3.4 to 0.

Smith also cited that a study had been done to determine the presence of any threatened or endangered species in the impacted area, of which none were found.

“We’ve also had to do a historic resource evaluation with archaeologists,” explained Smith. He stated that historic findings in an area could include anything from grave sites, old tools or pottery, to foundations of old homes. “… We identified 10 historic areas on the property and with our redesign have been able to avoid seven of them where we won’t have to do anything else. The other three, we are working with the Virginia Department of Historic Resources to address the three other remaining sites and what to do with those.”

The design change will also bring the number of homes within a half mile radius of the landfill down from 58 to 37.

He also stated that the new ownership will bring with it heavy experience in the management and operation of landfills.

Smith highlighted that despite the dramatic reduction of disposal area, the predicted 30-35 year life span of the recycling and disposal facility will not change, nor will the 3,500-5000 tons of trash and debris per day that the facility will be able to take in. Part of this lack of change is due to alterations in the western fill area where engineers have found places that can be dug deeper into. The landfill is also hoping to utilize new technology such as a biodegradable spray foam instead of dirt to cover the trash at the end of each day. This spray foam will both help to reduce odor and will break down over time, meaning that the foam won’t reduce landfill space.

The reduction of disposal area will not change the predicted $1.3-$2.7 million per year host fee that Cumberland County will receive from Green Ridge, Smith also cited.

Information on Green Ridge’s website, including frequently asked questions and facility data, will be updated following submission of the Part A application to DEQ.

Southall recognized for service on board

The Prince Edward County Board of Supervisors recognized one of its own members during the board’s regular December meeting. After... read more