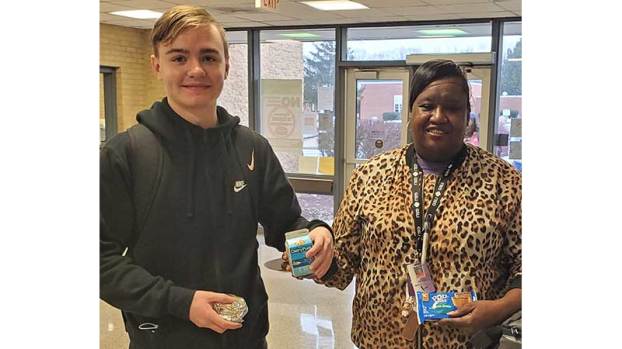 Pictured is Camden Libby being served a Grab & Go Breakfast by Jo Ann Oliver at the Career and Technical Education Center.

Prince Edward County High School (PECHS) recently received a $6,000 grant from No Kid Hungry Virginia that has helped develop the offerings of the school’s existing Grab and Go Breakfast program.

“What that grant does is it allows us to buy equipment to now service the students a little better,” Prince Edward County Public Schools Supervisor of Food Service Bruce Davis said.

Right now, the PECHS Grab and Go Breakfast offerings are just on a folding table in warm bags, he noted.

“(The grant) will allow us to buy carts that will keep the food a little warmer, and it will present it a little better than on a folding-up table,” he said.

The grant has also enabled PECHS to have a kiosk with breakfast food at the Prince Edward County Career & Technical Education Center across the street from the main high school building, Davis said. This is the first school year PECHS has offered Grab and Go Breakfast in the Career Tech building. It is more convenient for students whose homeroom is located in that building.

“And then (the grant) allows us also to buy a computer system that we can track the number of students that we serve, because right now we’re just writing it on a piece of paper,” Davis said. “We don’t have any real point-of-sale system that tracks it for us.”

The $6,000 grant was part of No Kid Hungry Virginia’s recent $32,000 grant investment across the state to support alternative school breakfast models known nationwide as Breakfast After The Bell programs.

The press release, from No Kid Hungry Virginia, noted that the Breakfast After The Bell program has a few different models, including the one PECHS utilizes — Grab and Go, in which PECHS students have the opportunity to pick up breakfast from the cafeteria or a mobile cart and eat during first period.

Officials in the No Kid Hungry Virginia release said more than 1,000 Virginia schools have Breakfast After the Bell programs. The recent $32,000 grant investment was distributed across five different schools, including PECHS.

One in seven children in Virginia live in families that struggle with hunger, the release stated. Research shows that hunger has long-term ramifications on children, including lower test scores, weaker attendance rates and a higher risk of hospitalizations and chronic diseases. No Kid Hungry Virginia and its partners focus on Breakfast After The Bell as a critical way to end childhood hunger in Virginia.