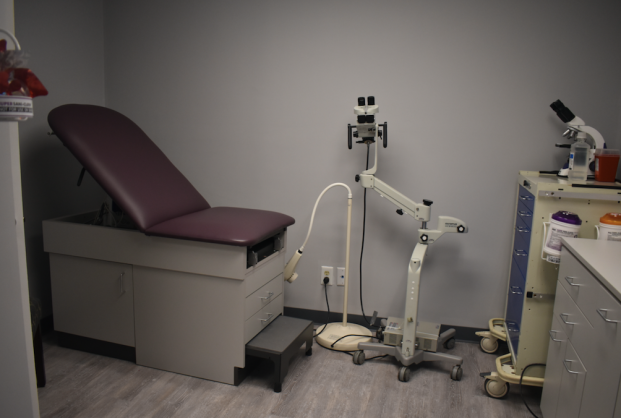 Pictured is an examination room inside SCVP’s forensic advocacy center. The organization is currently unable to provide forensic examinations to victims in Prince Edward County after Commonwealth’s Attorney Megan Clark withdrew her support for the program. (Photo by Alexa Massey/ Herald)

The lack of a forensic or sexual assault nurse examiner at Centra Southside Community Hospital means local assault victims will continue to travel to Lynchburg for forensic exams despite those services being available at the local Southside Center for Violence Prevention’s forensic advocacy center.

Prince Edward Commonwealth’s Attorney Megan Clark rescinded her support for the advocacy center late last year. At the time, it was unclear why Clark did not want local victims to take advantage of the advocacy center, which was established specifically to test and aid victims of sexual assault and domestic violence. She recently provided the reasoning behind her decision.

Clark said she believes testing performed in an advocacy center would open up the commonwealth’s attorney’s office to allegations of bias in sexual assault cases.

“My concern is the use of FNEs (forensic nurse examiners) or SANEs (sexual assault nurse examiners) to conduct exams from within an advocacy center,” Clark wrote in a statement to The Herald. “This practice will open the door to attacks in court of the evidence gathered at the exam from multiple angles, but the attack I am most concerned with is bias.

“When the person conducting the exam is tied directly to an advocacy center it can be argued in court that the objectivity of the FNE is affected by the close connections to a center that is not medically based, but instead advocacy based. Protecting the integrity of gathered evidence from as many angles of attack as possible is critical, and separating the medical response from the advocacy role is important, as they are two very distinct things.”

SCVP program director Monica Ratliff said Clark’s beliefs are outdated and do a disservice to victims of sexual assault in Prince Edward County.

“According to the International Association of Forensic Nursing’s website, ‘Forensic nurses most frequently work in hospitals, community anti-violence programs, coroner’s and medical examiner’s offices, corrections institutions and psychiatric hospitals.’ To believe that forensic nurses can only practice in a hospital setting is holding on to outdated information that no longer best serves our communities.

“As a nurse, we are bound to a code of ethics that requires us to be advocates, for our patients are informed on all aspects of their care. As a forensic nurse, I testify in courtrooms as to what I saw during the examination and testify as to what those results could mean. To be biased in any way would not only violate all nursing codes of ethics but could result in me no longer being able to practice as a nurse, as it could be grounds for removal of my licensure.”

SCVP is a non-profit organization that provides free and confidential services to those affected by sexual and domestic violence. The organization currently runs a shelter at an undisclosed location in Farmville. Its shelter serves the counties of Amelia, Brunswick, Buckingham, Charlotte, Cumberland, Dinwiddie, Halifax, Lunenburg, Mecklenburg, Nottoway, Powhatan and Prince Edward.

In 2019, SCVP announced its desire to establish a forensic advocacy program for Prince Edward County. The program would provide residents with resources following an incident, including advocacy for sexual and domestic violence victims trying to navigate the medical and legal system. SCVP’s forensic services are used by both Mecklenburg and Lunenburg counties, but the hope was to also offer these services to residents of Prince Edward, where the center is located.

Clark withdrew her support of the forensic advocacy program in July, putting a halt to the program’s establishment in Prince Edward County.

“The Southside Center for Violence Prevention serves an awesome role within our community as an advocacy center, and we are both a part of our community’s SexualAssault Response Team (SART),” Clark said. “We have communicated with each other through our SART meetings.

“At this time, in Prince Edward we will continue to send our victims to Lynchburg for forensic exams unless/until Centra Southside Community Hospital gets a forensic nurse examiner or sexual assault nurse examiner back on-site.”

“What is most concerning to me is the fact that patient choice is being removed,” Ratliff said. “A patient should only have two requirements when it comes to finding care after an assault. One, finding a facility that the patient chooses to have do the exam and two, focusing on their health and restoring balance to their lives. While I appreciate having connections and friendships, removing a patient’s right to choose where they receive care in order to have their case criminally prosecuted seems unjust.”

“Child advocacy centers (CACs) across the country have forensic medical providers on site to conduct examinations on child victims of sexual or physical abuse. These cases are successfully prosecuted in courtrooms across the U.S. on a daily basis,” Ratliff said. “SCVP was trying to become a CAC, but we were unable to do so after Megan withdrew her support. It is our hope to be able to provide these services to more individuals in need once we are able to successfully move past the barriers that are standing in our way.”

“I highly respect Ms. Clark’s opinion,” Clement said. “I will be monitoring our participation with the Southside Center for Violence Prevention and keep an open mind for reassessment.”