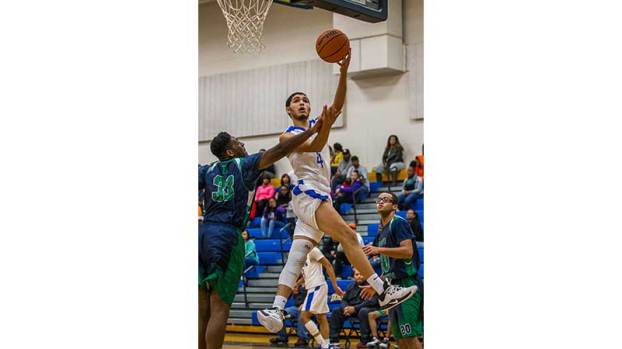 Cumberland County High School’s varsity boys basketball team went 1-1 in the recent two-day Cumberland Holiday Classic that it hosted, finishing as the tournament runner-up and taking its overall record for the season to 3-3.

“I wasn’t happy,” Cumberland Head Coach Tyrone Mosby said of his team’s performance against the Bearcats. “It definitely wasn’t our best game of the year. They beat us up and down the court. They shot from the perimeter better than we did. Their defense was better than ours.”

On Thursday, Dec. 26, the Dukes faced Monticello High School and prevailed 72-64 against the Mustangs.

“Being that (they were) a (Class 3) school and playing on our home court, I felt pretty decent about that,” Mosby said of the win. “We matched up well, offensively and size-wise, and kind of played our game, got up and down the floor and scored some easy buckets, went to the free throw line and made some free throws, so that’s what we’re trying to do, but we definitely didn’t do that the night after.”

Dukes senior Latrell Harris was named to the all-tournament team.

Evaluating his team’s play through six games, Mosby said, “Overall, I’m not happy, again. That first game of the year I felt we should have won at Nottoway. We got outplayed at Buckingham, a very athletic team, and we got outplayed on our home court and ended up losing our (tourney) championship to Banner Christian, so I’m not happy about it, but we’ve still got room for improvement, and it’s early in the season.”