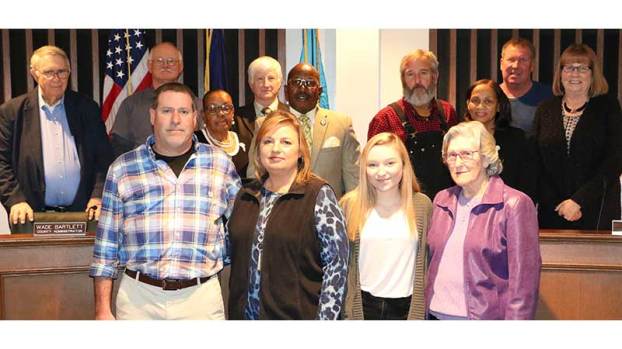 The Prince Edward County Board of Supervisors set aside time during its organizational meeting Tuesday, Jan. 14, to give special recognition to Billy Coe for his recent successful efforts in rescuing a man in a capsized boat on a pond within the county.

Leigh District Supervisor and Board Chairman Jerry R. Townsend stood and addressed those in attendance at the meeting.

“On January the 2nd, an incident occurred in a pond with two brothers, the Haskins brothers, (who) decided to go fishing,” he said. “And in that pond, the boat overturned. They were quite a distance out in that pond, fishing. … One of the brothers found his way back to shore, but the other one did not know how to swim, and he was out there facing a life-threatening situation.”

Townsend noted that Coe received a call out of nowhere, asking for his assistance.

“And he, out of the kindness and goodness of his heart, took his boat to Rice Creek Road over on Route 630,” Townsend said, “… where other fire and EMS had responded and utilized his boat, along with the fire, EMS, some of the responders, to get to this gentleman out there in the pond in cold, freezing water and found this gentleman and rescued him and got him back to shore where he was able to change clothes, gave him some of his clothes … so that he could be dry enough to get to the hospital.”

Gesturing to Coe in the audience as he continued to speak to everyone, Townsend said, “And I want to say to this gentleman, personally, that that was a heroic situation. It took courage beyond the normal call of duty to do that, and I’ll tell you, this board, we wish we had more citizens and constituents like you that’s willing to go beyond the call of duty in a life-threatening situation to save someone else’s life.

“And tonight, we don’t have much to give you, but we’re going to give you a handshake and ask you to come forward,” Townsend said in conclusion. “This gentleman here, we want to give him a standing ovation — Mr. Billy Coe.”

The standing ovation immediately followed, and he and his family were called forward for a picture with the board. Prior to the photo, each supervisor on the board shook Coe’s hand.