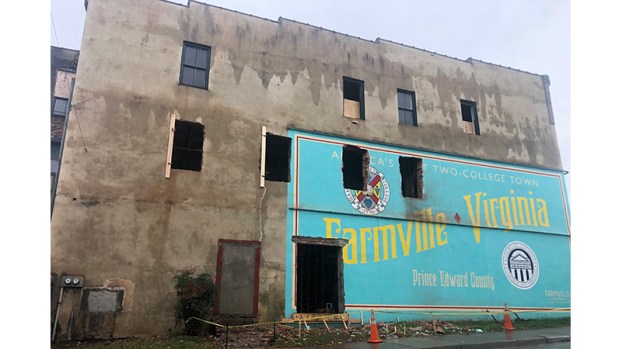 The mural painted on the side of the Doyne Building on the corner of Main and West Third streets in Farmville will be removed as part of renovations to the building.

Building mural will be removed

Those renovations will mean the end of the mural.

Known as the Doyne Building because it was once home to the Doyne family who used it for a funeral service business, the property was sold to new owners Joe and Leigh Fowkes and Chris Corcoran in September 2018.

The new owners plan to complete a historic renovation and preserve the significant structure that has been a cornerstone in Farmville since 1890, according to Joe Fowkes.

“Because this is a historic preservation project, we are working in conjunction with the Department of Historic Resources (DHR), which maintains rules for such projects on a state and federal level,” he said.

According to Joe Fowkes, DHR determined the mural on the building was not within the historic guidelines. They were told it could not remain on the building.

“We have always enjoyed seeing the mural as we enter downtown and its celebration of Farmville as a university town,” Joe Fowkes explained. “We hope to incorporate a banner in keeping with the mural when the restoration is complete.”

Fowkes says the plans for the building will include four commercial spaces at street level with the second and third floors redesigned for apartment spaces.

The new spaces will be called the Doyne Lofts, Joe Fowkes said. The renovations are expected to be completed by spring.