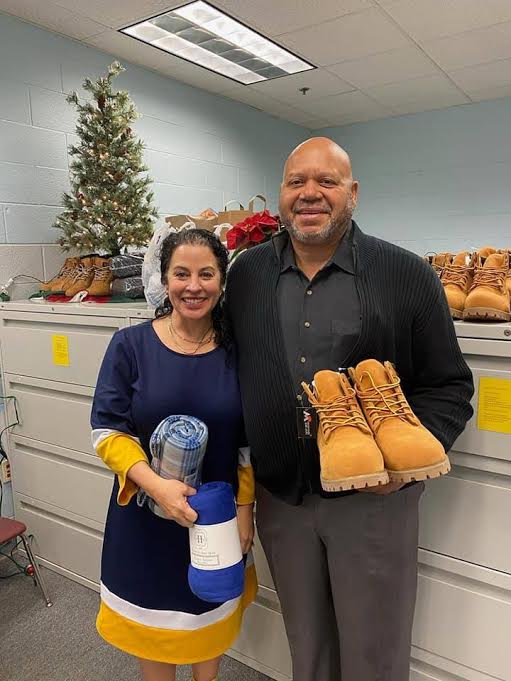 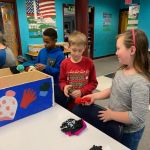 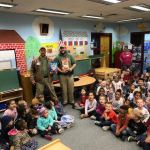 Animal Control Officers Michael Davis and Cody Sprouse visit the prekindergarten room to accept the donations collected by students to support the animals in the animal shelter. They also explained what they do to ensure the health and safety of the animals in the shelter.

Scales left behind a legacy of service and dedication to education.

During the day of service, prekindergarten students supported the local Cumberland County Animal shelter by collecting items such as dog and cat food, treats, blankets and pet toys.

Animal control officers came to the school and discussed what they do in the community in order to ensure the safety and care of animals.

Kindergarten students also made cards of appreciation for those that provide service to others, including sending thank-you cards to cafeteria workers for their work in preparing daily nutritious meals to students.

First graders spent the morning making place mats to brighten up the table of those in an area nursing home. Second graders partnered with the Pajama Program to collect pajamas for those in need. They also worked with eighth graders to make holiday cards for individuals in hospitals and to make place mats to be delivered by Meals on Wheels.

Third graders constructed flyers and posters about the Food Pantry, wanting to ensure that county residents in need of food were aware of this valuable resource by placing flyers and posters in local businesses and other places of interest.

Fourth graders collected gloves, hats and scarves for underprivileged students and members of the Girls Who Code group collected donations for Madeline’s House.

Middle school students participated in a variety of activities. Seventh graders participated in a schoolwide cleanup. They took their trash bags and patrolled the campus in order to pick up trash and debris. Sixth graders traveled to the elementary school, where they paired up with kindergarten students and read stories to them.

High school students, according to the release, also performed a variety of services for others. Among other activities, the CHS Science Club joined in the campus-wide trash pick up.

Dr. Jeff Scales, a longtime educator and former CHS principal and son of Betty Scales, visited CuCPS to view the service activities being done in his mother’s honor.

Editor’s note: This is part one of a two-part story covering the Prince Edward County Board of Supervisors’ extended discussion... read more