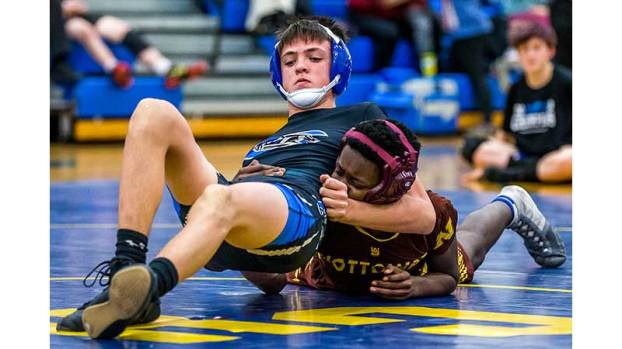 ‘A whole lot of heart’

Cumberland County High School’s varsity wrestling program featured some standout participants during the 2018-19 season, but participation has exploded for the Dukes during their 2019-20 campaign, opening the door for new opportunities that the program has embraced.

Charles Bristol has taken over as head coach of the Dukes varsity team, and he has had tremendous success in recruiting new wrestlers.

“We have eight returners, and I believe we have 28 total wrestlers, so we were able to recruit 22 new students,” he said.

Bristol noted that there is no junior varsity team, so all of those are varsity wrestlers.

Cumberland Athletics Director Joseph Nowak said, “We did a lot more team events this year than we did last year just because of our numbers that we had last year. What with us having 10 to 11 weight classes filled almost every night (this season), team events look a lot better for us.”

Bristol said the hallmark of the team’s success this year is the school’s incredibly supportive administration.

He also noted that because few schools in the area have wrestling, the Dukes must travel to find teams with whom they can be competitive.

“The bigger the school, the greater percentage of those kids who just have raw athletic ability, so we’ve been pretty lucky with getting kids who have a whole lot of heart,” he said.

Helping lead a promising Cumberland group is 152-pounder Trevor Dayton, who is ranked highly in the state.