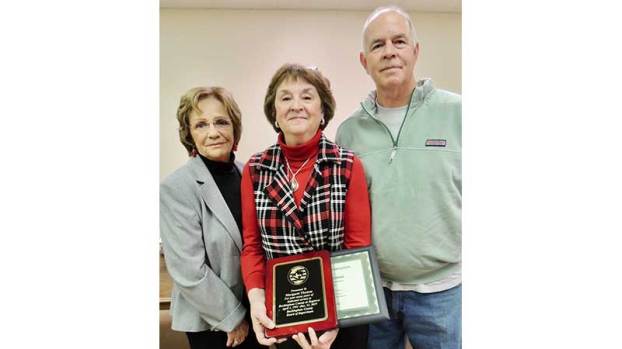 A farewell and good luck reception for Margaret Thomas, center, was held Dec. 16. Thomas was given a plaque and letter of recognition for her work serving as Buckingham County general registrar and director of elections for more than 28 years. Posing with Thomas are County Administrator Rebecca Carter, left, and District Three Supervisor Don Matthews, right. (Photo by Sue Miles)

For more than 28 years, Margaret Thomas has served as the general registrar and director of elections for Buckingham County. A farewell and good luck reception was held Dec. 16 at the Buckingham County basement conference room following the announcement of Thomas’ plan to retire at the end of 2019. Thomas received a plaque and letter of recognition from the county for her work over the years.

Lindsey Taylor, who trained with Thomas and will take over the position in 2020, described her predecessor’s work with the county as being invaluable. “She has been absolutely wonderful. It’s going to be very hard to fill her shoes. She has just been wonderful with training me, and I really hope that I can do her proud.”

“We will miss her a lot,” said Buckingham County Administrator Rebecca Carter. “She has always done her job with ease and professionally and never created any problems for the county.”

Janet Miller, who had worked as assistant registrar with Thomas and is also retiring at the end of the year, expressed her admiration and praise for the work done by Thomas. “She’s one of the most conscientious and responsible people I know. She has been invaluable in our community. She has roots in the community, so she has a great deal of experience. She’s always been forward-thinking, so she would recruit people in advance so that there would never be periods of time where we would be in a lurch or something for having people to work at the elections office during elections. So, I think she’s one of those rare managers/directors/supervisors who has not just the experience but also the wisdom to plan ahead, and I think that’s one of the things that really strikes me as unique about her and what made her so invaluable to the county and to voters in Virginia.”

During her time spent serving the county, Thomas grew close to not only her fellow employees at Buckingham County but other registrars as well. She gave guidance to others in a similar position, especially the women of local government. Prince Edward County General Registrar and Director of Elections Lynette Wright stated in reference to Thomas, “She has set an example of dedication for her job as voter registrar in Buckingham County. I for one am going to miss her greatly, especially our weekly phone calls. She has always been there for all her fellow registrars, willing to assist with anything that was needed. I will always be grateful for her kindness, friendship and knowledge. I wish her a very happy retirement.”

“I met Margaret when I first became registrar in August of ’92, and I must have looked like a deer in the headlights at some of the meetings because I was young and scared,” said Appomattox County General Registrar and Director of Elections Sabrina Smith. “Margaret just struck up a conversation with me, and we became best of friends, and she helped me learn and evolve and mature in my job. I’ve seen her do that many times with anyone that is struggling or in need of a helping hand. She was Johnny-on-the-spot, right there to offer anything she could personally do in her registrar capacity or as a friend. She’s a wonderful, wonderful lady, a wonderful friend, and I do appreciate everything she’s done for me and I believe we have a friendship that will go into retirement and beyond.”

Booth honored for 12 years of service