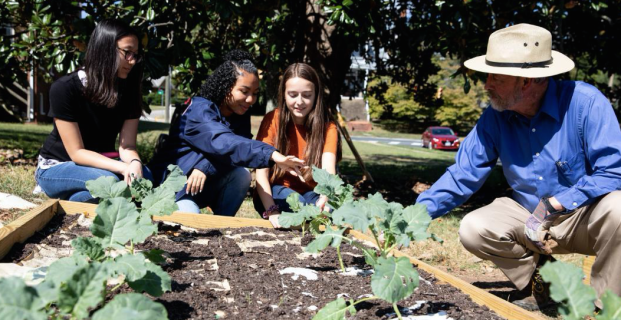 “I thought I could put in place something that is a gesture to the veteran community and educates my students about civilian involvement during the world wars,” said Lund. “I think they should know something about the cost of what the military does.”

Victory Gardens were used during World Wars I and II to supplement the nation’s food supply. Americans contributed to the war effort by planting gardens in backyards, empty lots and even on rooftops in cities. Neighbors pooled their resources and planted and harvested their own fruits and vegetables to help feed the community.

Last month students harvested vegetables from the garden, which consists of eight raised beds, for donation to a local food pantry.

According to a press release from Longwood University, aside from the three types of lettuces and leafy greens, they planted other cole crops, including turnips, beets, broccoli and daikon radishes.

“We’re giving food to people who need it. This is a way to help give back,” added Longwood Sophomore Timothy Eppes.

“I thought this would be a way for the students to get actual hands-on experience with planting and supervising and harvesting a garden,” Lund said. “I certainly connect it to the idea of citizen leadership, and we’ve now taken three reasonable loads down to FACES food pantry.”

Sophomore Ashley Rebehn, who has volunteered with FACES through another class, agreed that it’s nice to know that’s where the food they are harvesting is headed.

Although the students in Lund’s class were most directly involved with planting and harvesting the garden, the project was a community effort. Members of Longwood’s ROTC program helped to move dirt into the raised garden beds. Lund worked with facilities management staff to have the beds made, and the soil was amended with compost from the university’s biomass facility.

The garden is located on a busy corner of campus that is bordered by Griffin Boulevard and the Wheeler parking lot.

Lund plans to continue the garden in the spring with another section of English 215.

Macy speaking on campus in 2020

Beth Macy, the Virginia-based best-selling author and sharp-eyed observer of the opioid crisis and other challenges facing rural America, will... read more