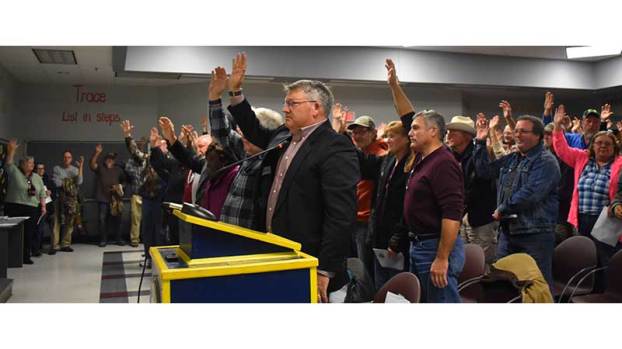 Many audience members stood up and raised their hands in order to show support for making Cumberland County a Second Amendment sanctuary. (Photo by Alexa Massey / Herald)

At the Dec. 10 Cumberland County Board of Supervisors meeting the board, voted unanimously, 3-0, to pass a resolution declaring Cumberland County to be a Second Amendment sanctuary. District Two Supervisor Lloyd Banks was not present at the meeting and therefore did not participate in the vote.

The full resolution is as follows:

WHEREAS, the Second Amendment of the United States Constitution reads: “A well regulated Militia, being necessary to the security of a free State, the right of the people to keep and bear Arms, shall not be infringed,” and,

WHEREAS, the United States Supreme Court in District of Columbia v. Heller, 554 U.S. 570 (2008), affirmed an individual’s right to possess firearms, unconnected with service in a militia, for traditionally lawful purposes, such as self-defense within the home, and

WHEREAS, the United States Supreme Court in McDonald v. Chicago, 561 U.S. 742 (2010), affirmed that the right of an individual to “keep and bear arms,” as protected under the Second Amendment, is incorporated by the Due Process Clause of the Fourteenth Amendment against the states, and

WHEREAS, the United States Supreme Court in United States v. Miller, 307 U.S. 174 (1939), opined that firearms that are part of ordinary military equipment, or with use that could contribute to the common defense are protected by the Second Amendment, and

WHEREAS, Article I, Section 13, of the constitution of Virginia provides “that a well-regulated militia, composed of the body of the people, trained to arms, is the proper, natural, and safe defense of a free state, therefore, the right of the people to keep and bear arms shall not be infringed,” and

WHEREAS, Article I, section 1, of the constitution of Virginia reads “That all men are by nature equally free and independent and have certain inherent rights, of which, when they enter into the state of society, they cannot, by any compact, deprive or divest their posterity; namely, the enjoyment of life and liberty, with the means of acquiring and possessing property, and pursuing and obtaining happiness and safety, and

WHEREAS, Article I, section 2 of the constitution of Virginia reads “that all power is vested in, and consequently derived from, the people, that magistrates are their trustees and servants, and at all times amenable to them,” and

WHEREAS, certain legislation that has or may be introduced in the Virginia General Assembly, and certain legislation which has or may be introduced in the United States Congress could have the effect of infringing on the rights of law abiding citizens to keep and bear arms, as guaranteed by the Second Amendment to the United States Constitution and Article I, Section 13 of the Constitution of Virginia, and

WHEREAS, the Cumberland County Board of Supervisors is concerned about the passage of any bill containing language which could be interpreted as infringing upon the rights of the citizens of Cumberland County to keep and bear arms, and

WHEREAS, the Cumberland County Board of Supervisors wishes to express its intent to stand as a Sanctuary County for Second Amendment rights and to oppose, within the limits of the Constitution of the United States and the Commonwealth of Virginia, any efforts to unconstitutionally restrict such rights, and to use such legal means at its disposal to protect the rights of the citizens of Cumberland County to keep and bear arms, including through legal action, the power to appropriate public funds, the right to petition for redress of grievances, and the power to direct the law enforcement and employees of Cumberland County to not enforce any unconstitutional law.

NOW, THEREFORE, BE IT RESOLVED by the Board of Supervisors of Cumberland County Virginia:

That the Cumberland Board of Supervisors hereby declares Cumberland County, Virginia, as a “Second Amendment sanctuary,” and

That the Cumberland Board of Supervisors hereby expresses its intent to uphold the Second Amendment rights of the citizens of Cumberland County, Virginia, and

That the Cumberland Board of Supervisors hereby expresses its intent that public funds of the county not be used to restrict the Second Amendment rights of the citizens of Cumberland County, or to aid federal or state agencies in the restriction of said rights, and

That the Cumberland Board of Supervisors hereby declares its intent to oppose any infringement on the right of law-abiding citizens to keep and bear arms using such legal means as may be expedient, including, without limitation, court action.

The board meeting Tuesday night was packed with hundreds of county residents and Virginians concerned that a new Democratic majority in Virginia’s General Assembly could restrict the Second Amendment rights of gun supporters. In order to accommodate the large crowd, the meeting’s location was changed to take place at Cumberland Elementary School.

District One Supervisor Bill Osl read the full resolution aloud to the packed board meeting. Before voting on the resolution, the board individually spoke regarding their thoughts on the sanctuary and Second Amendment rights in the county.

Osl thanked the audience and gave a special thank you to the Virginia Citizens Defense League, who provided a model resolution that Cumberland County chose to base its resolution on. Osl cited that as of Tuesday morning, he had been made aware of 45 other counties that had passed such resolutions, with several others planning on doing the same. He also thanked the Constitutional Sheriffs and Peace Officers Association for their support of the sanctuary, as well as local veterans that had expressed concern over their Second Amendment rights.

Osl stated that as a lifelong member of the NRA, he was in full support of the sanctuary and felt proud to stand up for the Second Amendment rights of Cumberland County citizens. During the meeting, he also read aloud a letter sent to him by a county citizen that did not support the concept of a sanctuary, as well as Osl’s own response to the questions.

“You say, ‘Guns are an issue.’ I say, the people using them are the issue,” read Osl. He also urged citizens to “keep up the fight” by going out to vote in order to stand up for their beliefs.

Board Chairman and District Five Supervisor Parker Wheeler asked before the vote occurred for all audience members who agreed with the resolution to stand up and raise their hand in order to show their support. The majority of the crowd of more than 200 got to their feet.

After seeing the group rise to their feet, District Three Supervisor Kevin Ingle asked how a state with so many individuals in full support of the Second Amendment could be represented and governed by a small group that decide to “look the other way and vote the other way.” He stated his own support of the resolution and encouraged those who are concerned about guns falling into the wrong hands to not be afraid of reporting individuals that seemed to have suspicious behavior.

Ingle also expressed that he himself is not a Republican or a Democrat, and encouraged residents to stick up for what they believed in and not simply “follow the shirttails” of others. “Be who you are, speak what’s on your mind, and let it come from the heart and the mind,” he added.

The vote to pass the resolution was unanimous, resulting in immense cheering and celebration from the majority of the audience.

Some individuals did come forward during the public comments to express their concerns regarding the sanctuary.

“First off, I want to say that I as a citizen of Cumberland County do support the Second Amendment,” said resident Betty Meyer. “However, I also feel that the problems we’re having with guns and these massive shootings and so on is not going to be changed whether this county is a sanctuary or not. That problem goes far beyond whether this county is a sanctuary or not. That’s just the way I feel about it, and that’s why I did not stand up.”

Community member Chris Rankin also expressed his feelings on the board’s decision. “I also support the Second Amendment, but I also realize that the problems that this country is having goes way beyond this,” said Rankin. “I also understand everybody’s concern about big government, and that goes for both sides. I was here to see how this was going to play out, and I’m satisfied with what happened here.”