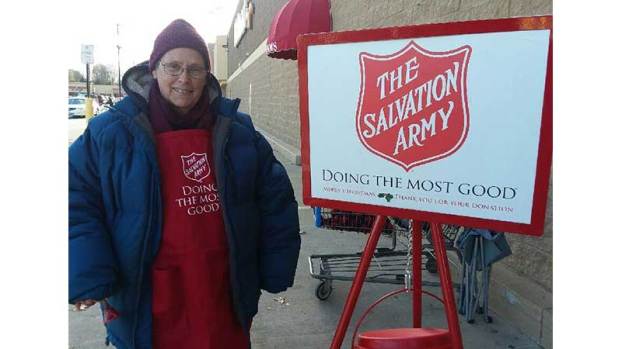 As a volunteer for the area Salvation Army Service Unit, which serves Prince Edward and Cumberland counties, Debora Warner rings the bell next to the signature red kettle outside of the Farmville Walmart on Wednesday, Dec. 4. The Red Kettle Campaign is The Salvation Army’s major fundraising event of the year.

Monroe Preston, chairperson of the local Salvation Army Service Unit serving Prince Edward and Cumberland counties, recently provided The Herald with an update on the status of the service unit and some of its current offerings.

After being presented with the understanding of some in the community that the area Salvation Army Service Unit had left the church that used to be the unit’s base of operations, Preston offered clarity.

“We hadn’t lost the church,” he said of the unit. “It used to be run out of the (Farmville) United Methodist Church. They used to have a little space there. … And it worked from there, and it was there for probably a number of years, so people were used to it being there. But I’m a member at Beulah (African Methodist Episcopal) AME Church, and so it’s convenient for me to meet people there, because any time that I need to do that, I can do that. I have pretty much the same goal as … the person who was the chairperson before me — basically it was convenient for them to use the United Methodist Church (before).”

“The Salvation Army’s Service Units are made possible by working with volunteer committees, consisting of local citizens, to identify and meet community needs and to network with statewide Salvation Army programs,” the organization continued on the website. “Volunteers receive specialized training to prepare them to work collaboratively with local agencies to utilize funding entrusted to them by The Salvation Army and assist others in need in the most efficient and cost-effective manner possible.”

Referring to the area service unit he oversees, Preston said, “We’re not a full-fledged Salvation Army (center), and some of that’s because we don’t have a building to work out of. … We’re not that big. We just have the cellphone.”

The cellphone number is (434) 607-2399, and dialing it is the main way for people in Prince Edward and Cumberland counties to reach the area Salvation Army Service Unit for services or to volunteer.

In addition to using Beulah AME Church as a place to meet with people in need, the unit also holds some meetings, such as those with advisory volunteers, at the Barbara Rose Johns Farmville-Prince Edward Community Library or Parrish House, Preston said.

Noting other locations the unit may utilize, Preston said, “We use local motels. A lot of times, we use the Days Inn because that’s convenient. A lot of people request that because it’s in walking distance of Walmart and stuff. They can get there to get things that they need and stuff.”

Touching briefly on the limitations of the area’s service unit, Preston said, “People call us all the time wanting to make a donation of furniture, clothing and all, and we’re not set up right now to do that. We were able to do that a couple years ago, but we’re not able to do that (now), so we will refer them somewhere else to do that, because we just don’t have a place that we could store stuff.”

Though the area lacks a Corps Community Center and the area service unit lacks a building to work out of and store things, this does not mean that most money donated locally is not staying local.

Preston highlighted how funds are distributed when it comes to The Salvation Army’s Red Kettle Campaign, the program involving the familiar red kettle for donations and a bell ringer, both of which can be found locally outside the Farmville Walmart on Peery Drive.

For what is donated outside of the Farmville Walmart, “90% of the funds stay here,” Preston said. “Ten percent go to headquarters. There’s not another organization that can actually say that. That’s one of the reasons that I volunteer my time, because it’s not like 50% goes to headquarters or (is) distributed out or whatever. But again, understand that that’s the money that goes through the Red Kettle program that we take up with the kettle.”

He later added, “Now, if someone makes a donation online, or something like that, there’s no guarantee that 90% of it is going to stay here. The thing that I caution people is to make sure that they put our area code down or that that’s where they’re making the donation to, and that way we will get a large percentage anyway.

“But whatever comes through the red kettles, 90% stays local, and we send a check to the headquarters, so we know that 90% of it’s going to stay here,” Preston said.

A press release from the area service unit noted that the Red Kettle Campaign is The Salvation Army’s major fundraising event of the year.

“Contributions to the Red Kettle Campaign in Prince Edward/Cumberland enable The Salvation Army to deliver emergency assistance and support to individuals and families who come to us in crisis, often at the very worst times of their life,” Preston said in the release. “The Salvation Army in Prince Edward/Cumberland provides Christmas gifts for children, shelter, food and other services to people who come to us in crisis. You’ll see our red kettles and bell ringers stationed outside (the) Farmville Walmart store Monday-Saturday, from the day after Thanksgiving until Christmas Eve. … Please, don’t forget to give to The Salvation Army red kettles this season. The funds raised from the Red Kettle Campaign are often all the funds we have to operate for the entire year.”

The release concluded by emphasizing that volunteers are crucial to the success of the Red Kettle Campaign, adding that individuals, families, groups and businesses can sign up by calling (434) 607-2399.

Volunteers are also crucial to the success of the area service unit, as Preston stated it is comprised entirely of volunteers at every level. No one is paid, not even the chairperson.

“People are asking me all the time how much do we pay bell ringers and stuff like that,” he said. “We do not pay bell ringers. Now, other places may, and I’m pretty sure they do, but we don’t here in Farmville. We don’t pay volunteers at all.”

This gives these volunteers an important nonprofit opportunity to serve their community, and another way they do that is through the Sheetz for the Kidz program.

On the website for the convenience store company Sheetz, the Sheetz for the Kidz program is described “as a way to give children in need the opportunity to celebrate the holidays with new toys, clothes and other basic needs.”

“We’ve already selected the families for that this year, and basically what we do is we pick 16 kids that Sheetz will shop for, The Salvation Army picks … those kids,” Preston said. “We don’t do any shopping or anything; we just pick out the kids. There’s a form and all that they need to fill out, and I will meet them at different places, usually at Beulah, and they fill out the forms and all. … (Sheetz also has) a party every year in the early part of December, and that’s where the gifts that they shop for are distributed.”

Noting some of the area service unit’s other offerings, Preston said it buys things for families and those that are in need.

“Christmas, we will do some shopping for that if we have volunteers,” he said. “What we basically need is volunteers to ring the bell.”

For those interested in volunteering or those in need of the area Salvation Army Service Unit’s services, call (434) 607-2399.