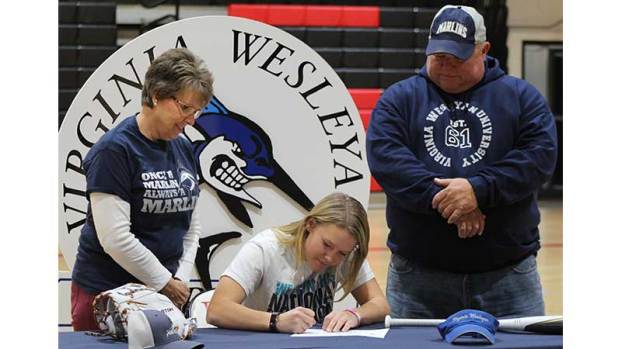 Reynolds signs to play for Marlins

Fuqua School senior softball star Carmen Reynolds formally announced her plans to continue playing at the college level when she signed to join the Virginia Wesleyan University Marlins during a recent signing ceremony at Fuqua.

Reynolds, who began playing recreational softball in Crewe at the age of 4, said it has been her goal to play college ball since she began playing travel softball about five or six years ago.

Reflecting on her signing ceremony Reynolds said, “It was extremely exciting. To be able to say that I’m going to play college ball really made me experience what a lot of people have experienced. It made me feel accomplished of my dream, that I had gotten there, especially to a two-time national championship school. So it just made me really be proud of myself and feel accomplished for getting there.”

The Marlins won the NCAA Division III Softball Championship in 2017 and 2018.

Speaking on behalf of Carmen’s mother and himself, her father, Roger Reynolds, said, “We’re super-excited. Of course, she’s put in the hard work, she does her share of batting practice and catching and all that, but yeah, we’re super-excited and super-proud of her.”

Carmen Reynolds noted some of the other college softball options that were available to her.

“I was being looked at by Virginia Tech, which is one of my top schools, and then Oklahoma State University,” she said, both of which are NCAA Division I schools.

She also commanded interest from an NCAA Division II school — University of North Carolina at Pembroke.

But she explained what made Virginia Wesleyan her ultimate choice:  “It was small, and I wanted to stay at a smaller school. … Coach (Brandon) Elliott always made me feel at home and always made everything that I did there kind of special to me, no matter what, whether it was a camp, if he came to watch me at a game — he always made it special to me as well as him to get me at that school.”

Explaining her expected role with the Marlins, she said, “Because we have eight coming in in our 2020 class, I will be kind of a fill-in player my freshman year for utility, so my main positions will be first, third and I believe he said outfield more than infield. But after that, I’ll probably be set (at) outfield and first base.”

She is looking at majoring in business.