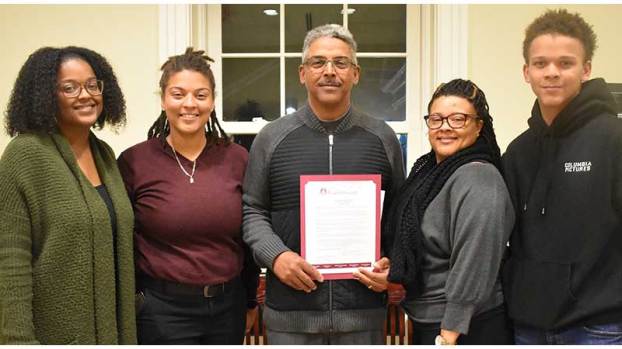 Travis Gilliam, center, poses with his family after receiving a resolution of appreciation from the board. To his left are daughters Kailyn and Kamren and to his right, wife Tamara Gilliam and son Kyler Gilliam.

During the Nov. 12 Cumberland Board of Supervisors meeting the board adopted two resolutions, one of appreciation upon the retirement of Travis Gilliam and the other in remembrance of the life and service of Jimmy L. Ownby.

Board Chairman and District Five Supervisor Parker Wheeler read the resolutions aloud and presented the documents to Gilliam and the family of Ownby.

The resolution of appreciation upon the retirement of Gilliam highlighted the lifelong resident’s dedication and service to the county and its citizens. According to the resolution, Gilliam began his service to the area in the Cumberland County Sheriff’s Office as a deputy sheriff in July 1988, where he served as a deputy for eight years and in 1997 was promoted to sergeant. Gilliam was promoted again to chief deputy in 2006 before becoming the school resource officer at Cumberland County High School in 2010.

The resolution highlighted that Gilliam served under three sheriffs during his tenure, and that he has volunteered countless hours for the Cumberland Youth League, Cumberland Recreation Department, as well as many other organizations.

In addition, the release cited Gilliam as being a devoted husband to Tamara Harris-Gilliam, his wife of 22 years, and a loving father to his three children, as well as an adopted father to all children that he mentored throughout his career.

“Whereas, Travis has tirelessly served the county and its citizens with distinction and integrity, and has earned deep respect, and esteem of those with whom he has worked over the years … Now, therefore, be it resolved that the Cumberland County Board of Supervisors, through this resolution, express its high regard and profound appreciation for the service that Travis Gilliam has performed for the county of Cumberland and its citizens over the past 31 years, and wish him much success in his future endeavors,” read Wheeler.

The board’s next resolution detailed the lifelong service to the county by Ownby, who was born Feb. 23, 1941, and passed away June 28, 2019. Ownby, according to the resolution, was born and raised in Cumberland County and served his country for six years in the Virginia Army National Guard.

During his 50 years in law enforcement, Ownby served Cumberland County as a full-time deputy sheriff for 18 years beginning in 1973. The resolution cited that he had worked most recently as court security since 2008. Ownby served under two sitting sheriffs during his career and was awarded officer of the year in Chesterfield County in 1972.

The board’s resolution cited that Ownby had a passion for the outdoors, especially in taking good care of his lawn. He loved to restore old cars including numerous 1957 Chevys, 2-seater T-birds and his 1964 and 1989 Mustangs.

Ownby, according to the resolution, tirelessly served the county and its citizens with distinction and integrity as a professional employee. He was a devoted husband to his wife of 55 years, Aliene Ownby, a father to three sons, and a grandfather of five.

“Whereas, Jimmy has distinguished himself through his loyal commitment to improving the quality of life for all citizens of Cumberland County, and has earned the deep respect and esteem of all those with whom he has worked with over the years; and … now, therefore, be it resolved that the Cumberland County Board of Supervisors, through this resolution, honors the life and records the death of Jimmy L. Ownby and extends to the family its deepest sympathy,” read Wheeler.

“Our family appreciates the board’s recognition of our beloved ‘Pop’,” stated Ownby’s son, Dennis Ownby. “We thought the resolution was a fitting testament to his service. Not many people would dedicate over 50 years to the service of others the way he wholeheartedly did.”