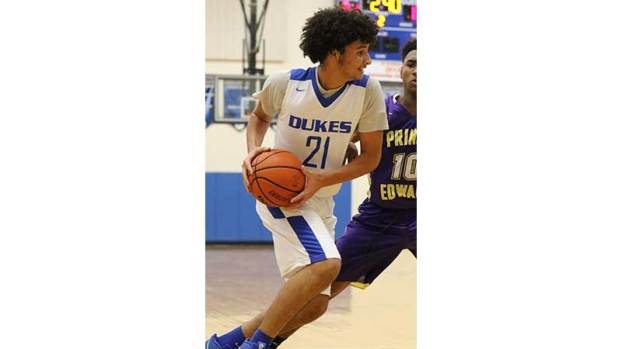 Cumberland County High School’s Kameryn Woodson, pictured from a game last season, has returned for his senior campaign with the Dukes and is emerging as a key difference-maker on the hardwood, helping lead his team to a 2-1 start. (Photo by Titus Mohler / Herald)

A rebuilding Cumberland County High School varsity boys basketball team has shown that it can win in multiple ways after its first three games of the 2019-20 season.

The Dukes persevered and prevailed 69-66 in double overtime on Wednesday, Dec. 11, against host Bluestone High School to improve to 2-1 on the season. The day before, they handed an 82-36 defeat to visiting Central Lunenburg High School.

Three games in, Cumberland Head Coach Tyrone Mosby said, “I’m feeling a whole lot better the last two games than (when) we played the first game. Of course, the first game we lost I think by 13 at Nottoway. I lost my starting five seniors from last year, and having to replace them with the first game on the road kind of showed. And (we) kind of built off of that loss and came back to practice and changed a few things and added a few things and kind of bounced back.”

Cumberland will miss some key players from last season’s squad that have now graduated, including guard Mark “M.J.” Patterson Jr., now a member of the Randolph College WildCats, point guard Noah Bland and 6-foot-7-inch center Christian Jackson. That trio led the 2018-19 Dukes to a 17-9 overall record after they advanced as far as the Region 1B semifinals where they fell to host Riverheads High School, 49-48.

“We’re smaller, a lot smaller this year without Chris, so we’ll definitely miss his size,” Mosby said. “At the point guard position, we’re smaller. Noah had a nice size, and he was a lefty at the point position, so that’s definitely a different look for me. And my shooters, M.J. was my best shooter, so I kind of lost that, and (I’m) just trying to find a couple of guys to team up to just give me what he gave me on the offensive end.”

The 2019-20 Dukes include four seniors, five juniors and one sophomore, with a couple players distinguishing themselves early on as having leadership potential.

“Right now, Kameryn Woodson has been playing well,” Mosby said of his 6-2 center. “He’s a senior for me.”

The coach noted Woodson is averaging around 15 points a game.

Leading Cumberland in scoring Wednesday, with 18 points, was 6-2 junior Javon Marion, who Mosby noted is capable of playing multiple positions.

“He can play all five, but he’s primarily the three, which is the small forward, or if we have to put him at the five, at the center — depending on what kind of situation Kameryn Woodson is in — he can play the five,” Mosby said.

The coach said Wednesday that “Kasaan Evans, he’s been playing well the last couple games. He played well tonight for me. … His leadership tonight as far as dishing the ball out and playing defense kind of helped us get that win.”

“He’s our hustle man,” the coach said. “He really doesn’t score a whole lot of points. He’s capable of getting offensive and defensive rebounds and putbacks, but his hustle is something you can’t coach.”

As for what made the difference for Cumberland on Wednesday against the Barons, Mosby said, “I would think our defense carried us over the hump, and we made some free throws coming down the stretch. Kasaan made some big free throws in overtime, and Kameryn and Javon got a couple of offensive putbacks for scores.”

Considering the 2019-20 season as a whole, the coach shared his expectations for what the Dukes could do.

“Of course, I’m hoping that we can make a run during the postseason,” he said. “It’s definitely a rebuilding season, so it kind of all depends on how much we learn as a team and who grows and how many kids can stay healthy throughout the year, and hopefully we get enough wins where it gives us a high seed in the district tournament and during the regionals.”

He noted his team was fresh off an important test against Bluestone, and the next game on the schedule is the Battle of Route 60, a showdown on the road with Buckingham County High School.

“Buckingham on Tuesday, with that environment over in Buckingham, will be another good test for us,” Mosby said. “Plus they beat Bluestone last night too.”

Tipoff against the Knights is set for 7 p.m.

Reflecting on a disappointing year