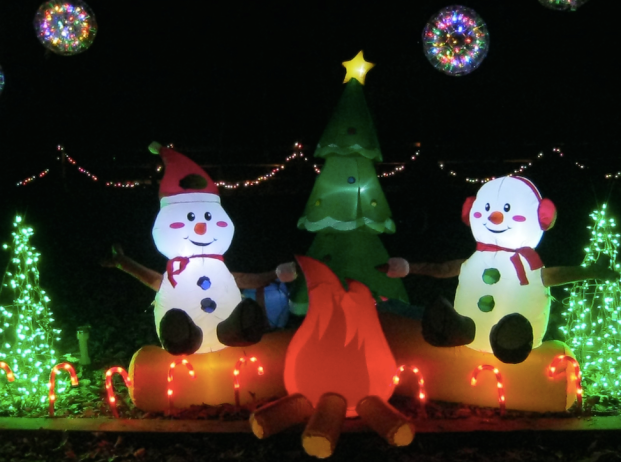 Each year the Bear Creek Lake State Park hosts its Lights at the Lake event. Community members can drive through the park for a light show, s’mores and more.

Preparing for Lights at the Lake

Preparations are in full swing for Bear Creek Lake State Park’s Lights at the Lake event.

The event, to be held Friday, Dec. 6-8, and again on Friday, Dec. 13-15, will feature a light show of decorated campsites displayed for community members as they drive through the park.

Tom Kneipp, chief ranger of visitor experience for the park, explained that the event has been held every year since 2014. Lights at the Lake was originally held for only one weekend in December, based around the annual Cumberland Christmas Parade, but has since evolved into two weekends of festivities and community engagement.

“Our campground area is closed for the winter, and we decorate the campground area and the main drive, all the way down to the lake, our beach area, with just an assortment of holiday blow ups and lights and things like that,” said Kneipp. “In the past couple of years we’ve had local groups sponsor their own campsite to set up and decorate. They’ll do maybe their own little camp/tent site, but the bulk of the work is done by our friends group, Friends of Bear Creek Lake State Park.”

According to Kneipp, each weekend the light show will last from 5:00 p.m-7:30 p.m. Families and friends can gain entrance to the park via a monetary donation or an unwrapped, packaged toy, both of which will go to the Cumberland Christmas Mother.

“Last year in 2018 we had 271 vehicles come through, and generally a lot of those vehicles are packed with a lot of people, the whole family, and sometimes a dog or cat,” stated Kneipp. “They donated a total of 435 toys and in addition donated $1,504 to the Christmas Mother.”

Kneipp added that in addition to enjoying the light show, visitors at the event can stop by Bear Creek Hall during their drive for free hot cocoa and crafts, including making Christmas ornaments. Individuals can also talk to Parker Redfox, the park’s mascot, and can even cook s’mores over a bonfire behind the Hall. “If they don’t have their marshmallows with them, supplies for making s’mores can be gotten from the friends group just for a small donation,” said Kneipp.

Kneipp emphasized the Friends of Bear Creek Lake State Park’s hand in making the celebration a success. “Every year it’s gotten bigger and the friends group are wonderful. Every year they add more and more decorations and now we get local people as well as people from out of the area donating more decorations or even setting up their own.”

Tim Kennell, president of Friends of Bear Creek Lake State Park, has been eagerly preparing for this year’s festivities. He highlighted the many hands that are involved in the event.

“It was originally started and operated by park staff,” Kennell said in reference to Lights at the Lake. “It was a small show, but we were thrilled to have it. There’s nothing else like it here in Central Virginia. And then the friends group, the volunteer group here, we wanted to help. So, we jumped in and started helping, but it was bigger than our group could do, so we had the idea that we would ask the camp hosts that come out.”

“Camp hosts come out and volunteer 30 days at a time to help around the park,” continued Kennell. “They give directions for trails, clean firepits, provide firewood, and act as historians for the park. We said, you know, gosh, if we could get together a group of hosts that we’ve had over the prior summer to stay a little longer after the campgrounds close, we can put this thing up. So that’s what we did. It’s the fourth year of the camp hosts participating.”

“Our primary purpose for doing this, it’s on several levels,” said Kennell. “No. 1, all of the proceeds collected at the gate, which is the donation of a new toy or a cash donation, all of that money and all of those toys go to support Cumberland Christmas Mother. That’s our focus, and it has been since the light show began. The second thing we wanted to do, we wanted to bring locals back to our park. You know, one of the common comments that we get through the show is, ‘Gosh, I haven’t been to Bear Creek in 25 years. We used to come out here as kids and stuff, and gosh, we haven’t been out here. It’s beautiful. We forgot how pretty it was.’ And of course, we get a chance to show it off when it’s sparkling with lights.”

“A third objective was to involve volunteers and community businesses, and we have solicited the Girl Scouts, the Boy Scouts, Bear Creek Academy, a number of church groups and Cumberland businesses to come in and sponsor a site to decorate. That develops community, and it also develops teamwork within the organizations, and so far we have about nine sites that have been fully decorated by either volunteer groups, Boy (Scouts) and Girl Scouts, churches or businesses, and we’re always looking for more. And it comes at no cost to them. We just want them to decorate the site. Once again, from a state park’s perspective, it draws the locals and local businesses, and we develop that relationship at the park.”

“And then the last thing is that it’s just a happy time here at this park. The staff love to come out and look and help where they can. They work hand in hand with the volunteers to make this event happen. And ultimately, you add all the pluses up and at the bottom you’ve got an equal sign, and that’s support for Cumberland Christmas Mother, and that is our No. 1 goal, stated Kennell.

Kennell explained that although nine sites had been fully-decorated as of Monday, Dec. 2, the park currently has 25 campsites that volunteer groups or businesses can decorate.

In addition to being president of Friends of Bear Creek Lake State Park, Kennell also serves as president of the Virginia Association for Parks, an umbrella group of state park advocates across the commonwealth. “I represent 4,200 volunteer members and friends groups from across the state who are out here doing the same thing in their park, so that’s quite an honor to go out and advocate through the General Assembly to fund our state parks. That’s what I do throughout the year,” added Kennel.

In describing his favorite memory of the Lights at the Lake event, Kennel stated, “I love it when the little Brownies and Girl Scouts come out. They come out to decorate their site. They come in off the school bus and we march up the road to the campsite that they’re going to decorate singing Christmas carols. We decorate the site and then we march back to a firepit that was decorated by the Civilian Conservation Corps in 1936 and have a campfire and sing and tell stories and have s’mores. That’s my favorite thing to do. I love it. And the Boy Scouts are great and all these groups are great, but they are really special because they’re so young and they love it. A lot of these girls have never been into a state park, so they can really see what it’s about.”

“I think my favorite part is the response that we get from people that go through the route and see everything,” explained Kneipp. “And to get in for an unwrapped toy, it’s a deal. So it’s kind of our way of giving back to the community. And the friends group, I can’t overstate how much work they put into it and how much effort they put into it.”

Groups and organizations interested in decorating a campsite for Lights at the Lake can contact Kennell at (804) 840-2985.

In the spirit of Thanksgiving, Hampden-Sydney College (H-SC) students, faculty and staff are focusing on giving back to the community... read more