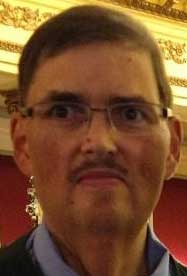 Mike’s spirit departed this life on December 9th. Born in Alexandria, VA, he was the second son of Timothy Fairbarns of Anacortes, Washington and Jacqueline Fairbarns of Buckingham. In addition to his mother, father and stepmother Sarel, he leaves behind two brothers, Jim and Robert of Fairfax, VA and a beloved nephew, TJ Fairbarns, of Fairfax, VA, and niece, Jennifer Fairbarns of Springfield, VA.

Mike graduated from Fairfax High School and the Computer Learning Center. After a successful career in the dot.com industry, Mike moved to Buckingham in 2010. He was a member of the Chamber of Commerce and the Buckingham-Dillwyn Garden Club.

Mike was an enthusiastic world traveler and gourmet cook. While it was exciting to be a part of the electronic communications boom, Mike often said his most rewarding and satisfying job was a brief stint as an emergency dispatcher in the Buckingham Sheriff’s office. He requested that those who wish to do so, make a contribution to the Buckingham Fire and Rescue Services.

A memorial service will be held at a later date.