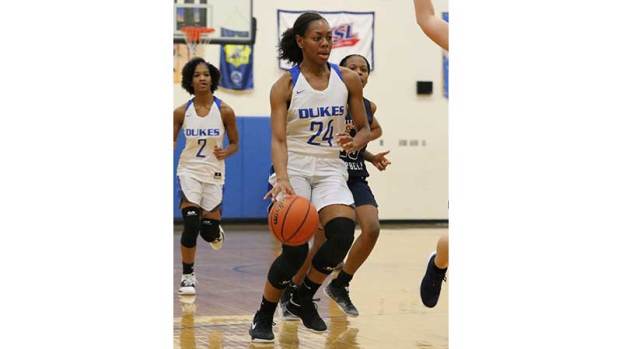 Cumberland County High School’s varsity girls basketball team proved resilient in advancing to the championship game of the tournament it hosted over the weekend, the Cumberland Holiday Classic, but the Lady Dukes ultimately fell 49-26 to Altavista Combined School in the final to finish as tourney runners-up Saturday, Dec. 14.

Saturday’s loss was only Cumberland’s second of the season, dropping the team to 4-2 overall.

The Lady Dukes earned that fourth win in their tournament game Friday against visiting William Campbell High School. Cumberland found itself down by double figures in both the first half and second half but rallied in each case and emerged victorious in overtime, 58-56.

“As a whole, I’ll take it; a win is a win,” Lady Dukes Head Coach Omar Liggins said. “We played real sloppy. I think we had way too many turnovers tonight, but one thing I’m going to say is — they didn’t give up. They could have easily shut down when we were down by, we were down 15 points at one time, and they just kept fighting and they kept fighting. So, it makes we feel a whole lot better just by them doing that.”

Trailing by as many as 10 in the first half, the Lady Dukes led 25-24 at halftime, but they trailed 40-34 going into the fourth quarter.

Lady Dukes senior Sade’ Gregory, who had been quiet for much of the game, hit two free throws with 37.4 seconds left in the fourth quarter to tie the game, 49-49, ultimately sending the contest to overtime.

During the extra session, Gregory hit two baskets to give her team a 55-51 lead, and junior Janaia Trent hit a layup and a free throw with 20.1 seconds remaining to give the Lady Dukes the lead for good.

Trent, who scored 20 points in that game, was named to the all-tournament team.

A rebuilding Cumberland County High School varsity boys basketball team has shown that it can win in multiple ways after... read more