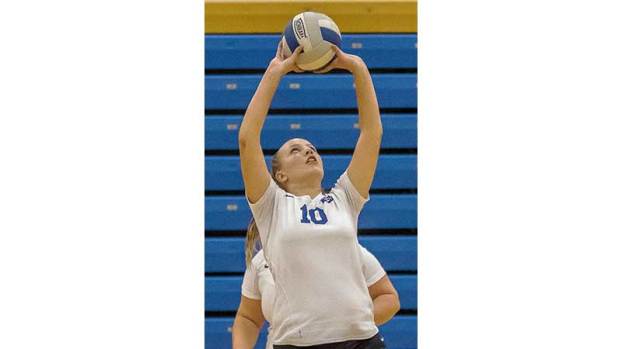 ‘I feel pretty good about the season’

Cumberland County High School’s varsity girls volleyball team had a strong back half to its 2019 season that ended in the Region 1B Tournament quarterfinals.

The No. 4-seeded Lady Dukes fell 3-0 to visiting No. 5-seeded Altavista Combined School.

“I think they fought pretty hard against Altavista,” Cumberland Head Coach Sharita Sutton said. Referring to senior setter Jordan Cooke, Sutton added, “We were missing a player. It’s hard to fill Jordan’s shoes, but they fought pretty hard, and I know they weren’t really ready to end the season, and it showed in how they played.”

Cooke was sidelined due to illness.

The Lady Dukes finished the year with an overall record of 7-10 after starting the season 2-6.

Reflecting on the season as a whole, Sutton said, “I feel OK about it. I wish we could have started off a little bit faster, with more wins … We had a little learning curve. But it got a lot better. I had a lot of fun with the girls, though, I feel like. I really appreciate all the effort; everybody gave 110%, so I feel pretty good about the season.”

Cumberland was a part of three matches that went to five sets, and it won two of them. The first one came Sept. 10 and it was the loss, happening at home against Buckingham County High School. Then, the Lady Dukes visited Prince Edward County High School on Sept. 24 and came away a 3-2 winner. Finally, they had their rematch with the Lady Knights on Oct. 10 at Buckingham and won 3-2.

Highlighting the Lady Dukes’ best performances of the year, Sutton said, “I would say their best match was against Prince Edward, the first one we had against them at their home, away for us, and then the second time we played Buckingham.”

The coach pinpointed two of her team’s five seniors as being the faces of the 2019 Lady Dukes — senior outside hitter Nikki Hurt and Cooke.

Of Hurt, Sutton said, “She’s definitely been my leader, I should say my boisterous leader. If I had to say anything about the leadership, I would say Nikki and Jordan. Jordan wasn’t really boisterous, she just led by action. She didn’t have a lot to say during a game. She just went out there and played her game. Nikki was that voice that said, ‘Hey, y’all, let’s pull it together. Let’s do this, let’s do that.’ Even when she wasn’t having the best of games or whatever, she didn’t have a problem owning that. So, those two together were definitely my leaders on the floor. Pretty much everybody followed behind them.”

Both Hurt and Cooke were recognized by coaches around the district when they were named to the 2019 All-James River District Second Team.

“I was very proud of them,” Sutton said in reaction to their receiving the accolades. “They both earned it. I think if we had had a stronger season, they probably would have made first team all-district, to be honest.”

The coach noted this was her first time coaching on the varsity level.

“(There) was some stuff that a more seasoned coach probably would have known and stuff like that,” she said. “But I was really proud of them making second team all-district because they deserved it.”

Tigers lose on the road in ODAC opener