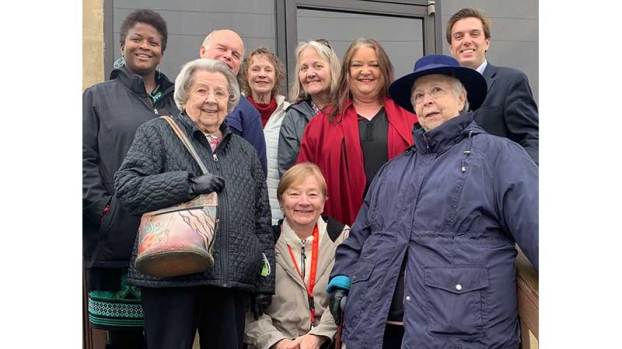 According to a press release from HOVFC, the purchase of the building was made possible by a generous anonymous donor.

Currently the HOVFC is located on S. Main Street in Dr. Edward Gordon’s former practice across from Walmart, and according to the release HOVFC needs to raise approximately $50,000 before the clinic moves from its current location to its new home on E. Third Street.

“These funds would go toward renovations we need to make before we move to the new location,” said Thomas Jordan Miles III, HOVFC vice president. “We’ve got a long process to get to where we need to be, and it’s going to take the help of the community to get there through monetary donations, donations of furniture, paint, cabinets, Sheetrock, lumber, appliances and lighting fixtures to make this dream become a reality.”

Pat Payne executive director of the HOFVC said, “For years, we have rented and moved from place to place as we seek to provide health care to those who too often fall through the gaps, notably the working poor without health insurance. Now we have a permanent home, thanks to a generous donor and the work of our staff and board of directors.”

HOVFC is a volunteer organization dedicated to the belief that everyone should have access to basic health care services. The idea for this clinic was born from a vision of concerned health care professionals and other community leaders in 2009.

The HOVFC was incorporated as a 501(c)(3) nonprofit organization in 2010, and in April 2012 opened its doors to its first patients. Since then the clinic has held over 500 clinics, providing nearly 3,000 appointments for more than 550 patients. In the seven years the clinic has been open, HOVFC has provided more than 8,440 prescriptions valued at over $1 million.

“We’re very proud of the work that Payne and her staff of steadfast volunteer doctors and nurses and volunteers have been able to do in this community,” said HOVFC Board Chairman Edith Vaughn. “We are looking forward to our move, which we hope will take place after winter or in about three months.”

Payne said the new building is about 3,300 square feet, which will allow more office space and more space for exam rooms and a larger pharmacy.

“We’re very grateful for the hard work of our Facilities Committee in helping secure this building,” Miles said, “which will allow us to provide more services, expand the services and programs we provide now, and most importantly, allow better access to health care to those who fall through the cracks daily to lead them to better lives.”

For more information on the clinic, email heartofvirginiafreeclinic@yahoo.com or call (434) 315-5701.

Shoppes at College Park, LLC, is engaging in an extensive repair and repavement project for the driveways and parking areas... read more