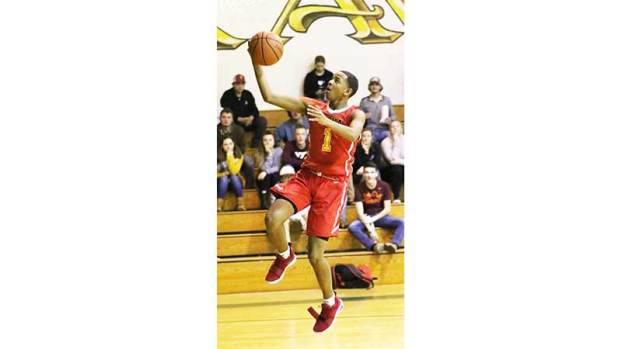 Fuqua School guard Maureon Tisdale-Couch is one of nine returners on the Falcons’ 2019-20 roster. Now a junior, Tisdale-Couch will be a key ball handler for Fuqua. (Photo by Titus Mohler / Herald)

Falcons fans will find Fuqua School’s 2019-20 varsity boys basketball team quite familiar, as it features nine returners who bring the experience the squad will need to fulfill its goal of playing for a state championship.

“My expectations for this team are really high,” Falcons Head Coach Mike Edwards said. “We had a great run beating some really good teams, but we also had the opportunity to beat some others where we were leading up to the final minutes of the game. Our goal is to make the state tournament. We missed it last year by a couple of votes. I know that if given an opportunity, we can make a great run.”

Last season, the Falcons went 16-7, but they were not able to draw the required votes from the Virginia Independent Schools Athletic Association (VISAA) committee to be among the top 12 teams in VISAA Division III.

In Fuqua’s effort to clear that hurdle, “we got the ball rolling in our first two scrimmages — Randolph-Henry High School and James River High School, (of) Richmond,” Edwards said. “We had a set back in our home opener against Brunswick Academy, but every situation and every game is a learning experience. Learn from each game and turn your focus to the next opponent. Another goal is to get better every day. When we step out on the court, our job is to learn, grow and get better.”

The Falcons press on this season without some 2018-19 team members, as Tanner Cyrus graduated, Jacob Dillon transferred to Manchester High School in Richmond, and Tanner Thomas transferred to Liberty Christian Academy in Lynchburg.

“I will be relying heavily on all my returners,” Edwards said. “Each player on our team brings something different. We will need each player to bring their unique ability each and every night in order for our team to be successful.”

The Falcons will face 2018-19 state-qualifying teams this season to see how they do and to hopefully draw committee votes with their performances.

After a Tuesday game at Richmond Christian School, Fuqua (0-1) begins play Friday, Dec. 6, in a two-day tourney at Eastern Mennonite High School. The Falcons will face Millwood School at 6 p.m.

Erickson to golf for Lynchburg Hornets

Fuqua School senior Emily Erickson formally announced her intention to take her golf talents to the next level when she... read more