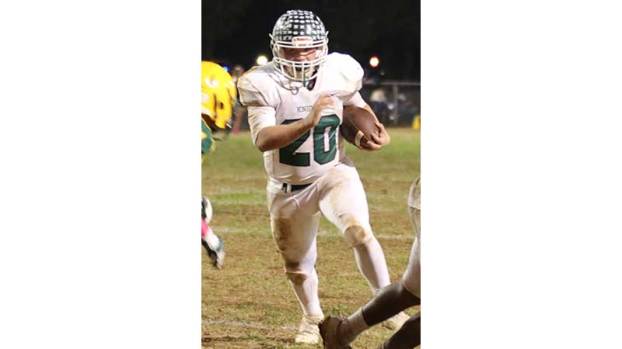 “It’s good to see this group get recognized for their accomplishments on the field,” Buckingham Head Coach Seth Wilkerson said.

Buckingham players making the first team included Edwards, as both a running back and linebacker, senior Cole Edmondston, as both a tight end and defensive end, senior Garrett Hafley, as both a center and defensive lineman, junior Xavier Copeland, as both a defensive back and punt returner, junior quarterback Gerry “Tae” Toney, junior offensive all-purpose player Xavian Gough and junior kicker Wesley Snoddy.

Edwards was outstanding on both sides of the ball for the Knights throughout the year, explaining his Player of the Year honors. He finished the season with 116 carries for 1,420 yards and 14 touchdowns, and on defense, he ended up with 84 tackles, including 14 tackles for a loss in yardage and four sacks.

“That’s a great accomplishment for him,” Wilkerson said of the dual Player of the Year accolades for Edwards. “I’m not sure if that’s ever happened where one player got both, but all the coaches in the James River District voted for him, and each of those (honors), I’m happy for him that he was able to get (those).”

Stats for other Buckingham first-team selections are as follows: Edmondston finished the season with 41 tackles, including eight tackles for a loss and one sack. Toney had 125 carries for 1,212 yards and 23 touchdowns, and he was also 12-for-32 passing for 236 yards and two touchdowns. Xavian Gough ended up with 44 carries for 441 yards and seven touchdowns. Snoddy was 35-for-41 on extra points, and he went 2-for-3 on field goals, making one as long as 36 yards.

“We had five seniors this year, and they’ve been with the program since they were in eighth grade, and I’d like to thank them for their leadership throughout the year,” Wilkerson said. “And I was pleased just how they were able to get recognized.”

A rebuilding Cumberland County High School varsity boys basketball team has shown that it can win in multiple ways after... read more