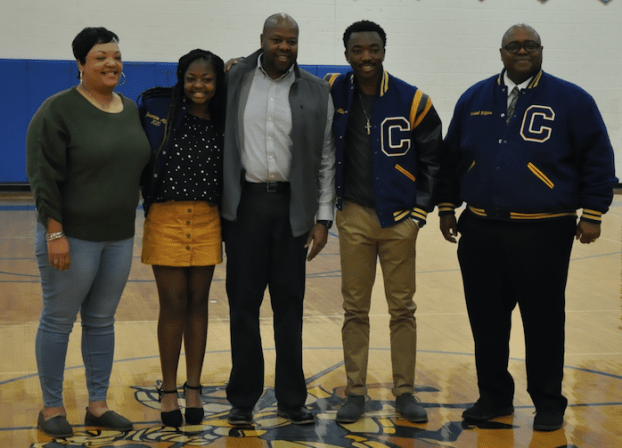 On Tuesday, Nov.26, thirty-eight seniors at Cumberland High School (CHS) were awarded an academic jacket during a ceremony held in the CHS gym. These jackets were presented to students who had maintained a cumulative 3.0 GPA during high school. Parents and family members of the recipients were welcome to attend.

The ceremony began with the entrance of the recipients, followed by the presentation of the colors by the JROTC Color Guard. Jack Williamson performed the national anthem on his trumpet and CHS Eugene Williams made opening remarks.

Williams presented the jackets to the recipients as Assistant Principal Ashley Long announced the names. They were assisted by Ashley Lawson, school counselor, and Marie Hopper, guidance secretary.

Recipients were escorted by parents, family members, and/or friends to receive their jackets. A special presentation was made in remembrance of Tyauna Woodson, who was an honor roll student who died in a tragic car accident in 2017. She would have been a senior this year. BreAnne Woodson, Tyaunas’ mother, was presented a bouquet of pink roses in her memory.

At the conclusion of the ceremony Williams made closing remarks. Parents, guests and recipients were then invited to a reception with light refreshments served in the cafetorium.

Wahrman recognized for years of service