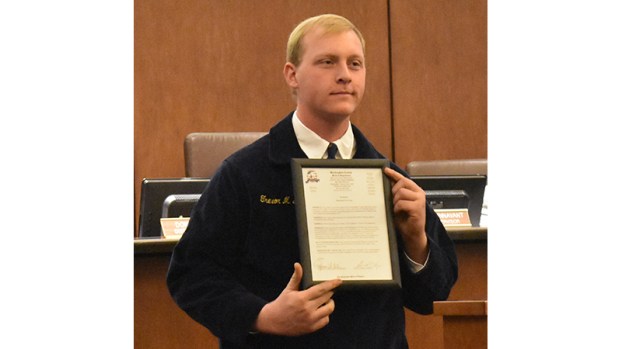 Trevor Agee poses with a copy of the resolution adopted by the Buckingham County Board of Supervisors to honor his accomplishments at the National FFA Convention and Expo. A second resolution was adopted honoring the memory of Trevor’s grandfather, longtime GVFD Fire Chief Pete Agee.

Agee family recognized by board

The Buckingham County Board of Supervisors (BOS) adopted a resolution at its Dec. 9 meeting to honor resident Trevor Agee for his accomplishments at the National Future Farmers of America (FFA) Convention and Expo. A second resolution was adopted by the board to honor Trevor’s late grandfather and longtime Glenmore Volunteer Fire Department (GVFD) Fire Chief Pete Agee.

Trevor stood before a packed audience at the meeting as Board Chairman and District Two Supervisor Donnie Bryan read aloud the resolution, citing that Trevor recently graduated with honors from Buckingham County High School. Trevor was a member of FFA, the National Beta Club and The National Honor Society. He received The Prudential Spirit of Community Award for outstanding volunteering as a member of GVFD and also received the Volunteer of the Year Award from the Buckingham Student Council Association.

The resolution highlighted that Trevor worked summers and evenings at his family’s business, Dillwyn Repair Service, where he developed a strong work ethic.

Trevor served as a leader in the Buckingham FFA, holding an officer position his last three years of high school; historian in his sophomore year, vice president in his junior year and president in his senior year. According to the resolution, he was nationally recognized for an award in FFA for agricultural repair and maintenance and won state in his category at the 93rd Virginia FFA Convention at Virginia Tech, making him eligible to enter and compete on a national level. Trevor’s application was selected out of 50 other national finalists.

The resolution stated that Trevor then traveled to Indianapolis, Indiana to compete at the National FFA Convention and Expo, where he received second place with a plaque and a monetary prize.

“Therefore be it resolved that on this ninth day of December, 2019, the Buckingham County BOS do hereby recognize Trevor Agee for his great achievements,” read Bryan as he shook Trevor’s hand and presented him with a copy of the resolution.

Bryan then read aloud a resolution in memoriam of Pete, Trevor’s grandfather. Several members of the Agee family came forward to accept a copy of the resolution.

The resolution cited that Pete, born July 7, 1948, departed this life on Sept. 30 at the age of 71. The son of the late Willie Ford Agee and Florence “Virginia” Smith Agee, Pete is survived by his wife of 51 years, Vernelle Ragland Agee; his son, Keith Agee and a daughter, Beth Gibson and husband Jeremy. He also leaves behind grandchildren Taylor Agee, Trevor, Courtney Agee, Joshua Gibson, Abigail Gibson and Daniel Gibson, as well as a great-grandson, Bryson Wood. He is also survived by his three sisters, Linda Starkey and husband Jim; Debra Goff and husband Lynn and Carolyn Fitzgerald, along with many nieces and nephews.

According to the resolution, Pete was a member of Glenmore United Methodist Church and was also the owner of Dillwyn Repair Service. He was a member of GVFD for 50 years and served as GVFD fire chief for more than 47 years.

A car restoration enthusiast, Pete was known for his generosity and kindness to all.

The resolution cited that Pete was “a pillar to the community” and was loved and respected by all who knew him, and he will be greatly missed.

More than 200 children experienced a Christmas Eve to remember thanks to volunteers with the Carl U. Eggleston Foundation’s annual... read more