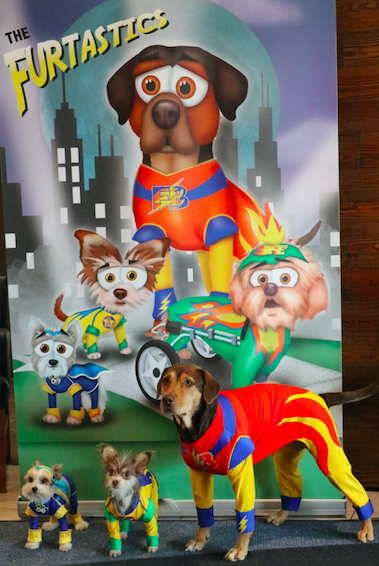 Posing Sunday in Farmville in front of a poster for “The Furtastics” children’s book series that they star in are, from left, Zachary, a Yorkshire Terrier playing Captain K9; Piper, a Terrier mix playing Aerostar; and Shelby, a Labrador mix playing Firebolt. 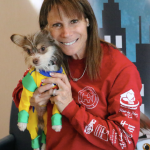 Debbie Pearl, co-author of “The Furtastics” children’s book series, holds one of the series’ stars, Aerostar, played by Piper, a Terrier mix. 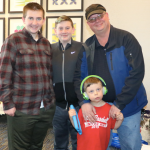 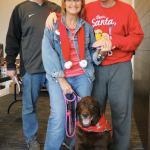 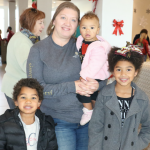 The Southside Society for the Prevention of Cruelty to Animals (SPCA) held its eighth annual Holiday Donation Drive on Sunday, Dec. 8, from 1-6 p.m. in Farmville, with some celebrity animals helping to draw a crowd over the course of the afternoon.

Held at the Holiday Inn Express & Suites, the event featured a variety of attractions, but one of the most prominent was Shelby, the Labrador mix that starred in the 2019 hit movie “A Dog’s Way Home.” Shelby, who portrayed a dog named Bella in the film, starred in the movie alongside Ashley Judd and Edward James Olmos and was given a voice in the film by Ron Howard’s daughter, Bryce Dallas Howard.

But on Sunday, Shelby was helping promote her next project, which involves a foray into children’s literature.

In a forthcoming series of books about a group of superhero animals, Shelby stars as Firebolt. She was on hand Sunday, in costume as Firebolt, with some of her co-stars from the books and her owner, Debbie Pearl.

At the TheFurtastics.com, the following description is provided for “The Adventures of Firebolt,” written by Pearl and Brittany Nicole Lewis and illustrated by Jack Foster: “When you least expect it, at any moment, your life could change in amazing ways. Well, that’s what happened to Shelby! Her family thought she was the greatest dog ever, and she was, but then one day Shelby got her superpowers…

“Join Shelby, and her friend Chester the cat, as they discover the hero life. What adventures will they go on, and who will they save? What superhero friends will they team up with along the way?

“As Shelby, she lit up the lives of her family.

“As Firebolt, she will light up the world!”

The book is available for preorder on Amazon.com and will be released Jan. 27, 2020.

The one “Furtastic” absent Sunday was the handi-capable superhero Fast Eddie, a Terrier mix whose real-life name is Eddie. He had a good reason for not being there, though, as Pearl noted he was fighting crime.

“All these dogs were rescues,” Pearl said.

Steve Smelcer, who is on the Southside SPCA Board of Directors, noted being pleased with how Sunday’s event was going.

“A lot of people bring their dogs in to see Santa, and we’ve got some raffles going on, some silent auctions going on,” he said. “A lot of people are here to see Shelby, the movie dog, so (it’s) a lot of fun.”

In mentioning Santa, Smelcer was referencing the holiday pet portraits those attending could obtain with Santa and Mrs. Claus.

As the Southside SPCA website noted, Dr. Sabra Lucas was also in attendance, offering an informative presentation, and Bill Troiano came with Goliath the Amazing Rottweiler, showcasing some of Goliath’s abilities, which include being able to retrieve more than 600 items by name and being able to distinguish colors, stuffed animals, toys, food, shoes, wallets and more.

PECMS gives back this Thanksgiving