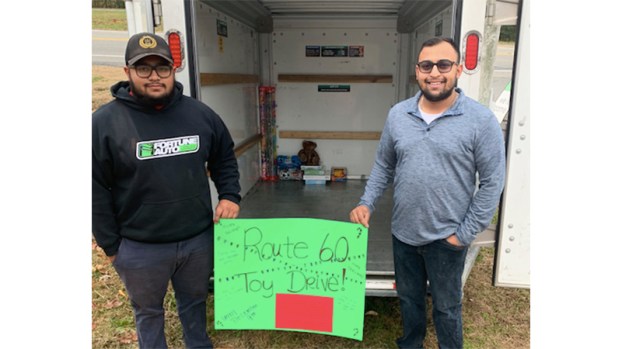 From left, Nikhil and Ajay Patel are hoping that the community members can come together to make Route 60 Convenience’s toy drive a success.

A Buckingham County convenience store is asking for help from the community in order to bring Christmas to children in need. While their first ever toy drive is off to a slow start, they are hoping that residents can come together to make an impact on local children this holiday season.

On Nov. 11 Ajay Patel, whose family owns Route 60 Convenience in Buckingham, posted a somber photo of a nearly empty U-Haul truck to the store’s Facebook page.

“We have a population of 17,000 people in Buckingham County and we’ve only had two donations,” read the photo’s caption. “I know if we all came together we could have this trailer stuffed with toys, so everyone can have a wonderful Christmas.”

Patel’s family have owned Route 60 Convenience since 2006, but spent the last 10 years renting the store out to other tenants. The family decided to begin personally running the store as of March of this year, and have spent the last eight months putting on various fundraisers and events in order to give back to the community.

“We have been doing small things around here where we did a couple of charity car washes. We partnered with one of the car clubs out here and then we did a trunk-or-treat for the kids during Halloween. Then we decided that for the winter we wanted to do a toy drive,” explained Patel.

Patel stated that Route 60 Convenience is one of the only authorized U-Haul dealers within the area, and the business partnered with U-Haul in order to decommission a trailer for 30 days so that it could be used to fill with unwrapped, packaged toys for Buckingham children in need this Christmas. From there, the store has up until Dec. 9 to fill the trailer before bringing it to the Buckingham Department of Social Services, where the gifts will be sorted by age group and distributed to Buckingham children in time for the holiday.

According to Patel, the Facebook post has garnered over 200 total shares and has been viewed by approximately 2,000 people. Despite these numbers, only 2 additional donations have been made.

“And we’re not asking for anything expensive; toys, crayons, coloring books, anything. A $1 item. Just something that a family in need can have this Christmas that the Department of Social Services can give back to these kids,” said Patel.

The store has partnered with their local Exxon and Virginia Lottery representatives in order to offer prizes to those that donate to the cause.

“We’re an Exxon station,” said Patel, “so our local Exxon rep is donating I think up to $200 in gas cards … So everyone that brings in a toy, we write their name and number down, and I think we’ll have 20 gift cards. And Virginia Lottery has given us $200 in scratcher tickets. So, we’re trying to come up with one day from now until Dec. 9 that everybody can come in and drop all these toys off, and everybody that comes in per family will get one Virginia Lottery scratch ticket.”

Despite a lack of initial donations, Patel is hoping that the community can come together to make the toy drive a success and leave the U-Haul brimming with gifts for local children to enjoy.

“One of our main priorities was to get enough toys to fill the trailer, but we wanted them distributed back in our own county,” Patel added. “We didn’t want it for any gain for ourselves. We were just trying to show that everybody could come together in this county and support the people that are our neighbors, basically … We’ve been back here since March, and since March we’ve been trying to just make a big change, spread some positivity and show that local businesses can still keep the community going.”

Lt. Col. Robert J Driver Jr. moved to Farmville from Brownsburg only a few months ago in order to be... read more