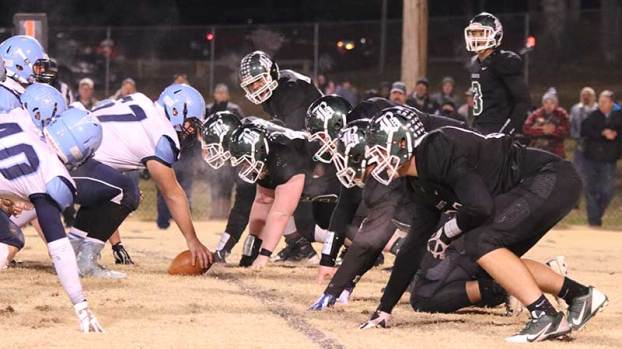 Buckingham County High School’s varsity football team would not be denied its first playoff win since 2015 on Friday night, Nov. 15, and to achieve victory, the Knights had to deny visiting Page County High School on the final play of overtime.

The score was 13-13 at the end of regulation in the Region 2B quarterfinal, and No. 2 seeded-Buckingham scored first in the extra session to go up 20-13. The No. 7 Panthers responded with a touchdown of their own, but when they decided to avoid another overtime period and go for the win with a two-point conversion, the Knights’ defense held, securing a 20-19 playoff victory.

“We knew they were going to be tough,” Buckingham Head Coach Seth Wilkerson said of the Panthers. “Anybody in the playoffs now is going to be tough. I was just proud of the way these guys hung in there, just overcame a lot and just were able to battle and get the win at the end in overtime.”

It was Buckingham senior running back Walter Edwards who ran for a 10-yard touchdown on the first play of overtime, with junior kicker Wesley Snoddy hitting the extra point, giving the Knights a lead they would never relinquish.

Shortly thereafter, Page County scored a touchdown as well and went for two, but multiple Knights were there to make the win-sealing stop, including freshman defensive back Kenneth “K.J.” Williams.

“K.J. Williams, he was in on it,” Wilkerson said. “I think Walter Edwards was in on it, and I want to say Xavian Gough, they were all there. It was hard for me to tell, from where it was filmed, exactly who got there, but it was between all three of them.”

The coach shared what was happening moments before the big play.

“(The Panthers) were getting ready to go for the two-point, and I called timeout just to kind of see what they lined up in,” Wilkerson said. “They pretty much stayed in the same set most of the game. They had been running sweep and had some success with it, and I told (my players) to watch out for sweep on that side. But it came down to those guys stepping up and making the play.”

The highly competitive contest was close every step of the way, featuring a 7-7 score at halftime.

Edwards led the Knights on offense for the game, with 23 carries for 162 yards and two touchdowns. He also led the way, defensively, with 10 tackles, including one for a loss of yardage.

“He stepped up when we needed him to,” Wilkerson said. “He just plays solid on both sides of the ball and has been — same thing he’s done all year.”

Buckingham junior quarterback Gerry “Tae” Toney had 11 carries for 37 yards and a touchdown.

“Page’s offensive and defensive lines were tough,” the coach continued. “I thought they were one of the best lines we’ve seen since Goochland, and they did a good job, both sides. But (our) offensive line really stepped up.”

Page County finished a strong season with a 7-4 overall record.

“The region we’re in, if you’re looking from top to bottom, everybody’s tough,” Wilkerson said. “There are no bad teams that just happened to make the playoffs. All of them are good.”

Buckingham County High School’s varsity football team entered this season with some important goals, and one of them was entirely... read more