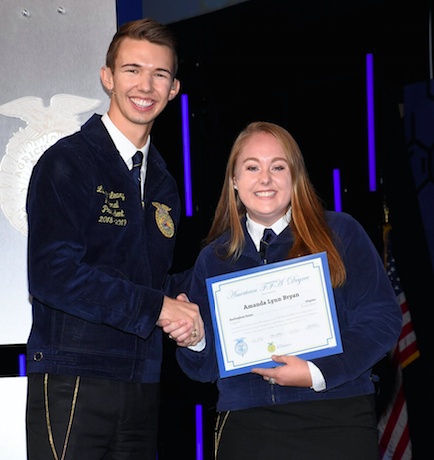 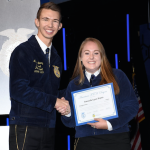 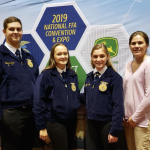 The Buckingham Sr. FFA Chapter was named as a Two-Star National Chapter for the third year in a row. The National Chapter Award program recognizes outstanding FFA chapters that actively implement the mission and strategies of the organization. The award is based on the chapter’s use of the National Quality FFA Chapter Standards and a Program of Activities that emphasizes growing leaders, building communities and strengthening agriculture.

Trevor Agee was named as a National Finalist for his Proficiency Application. This award is based around his supervised agricultural experience in the area of agricultural mechanics repair and maintenance – placement. Agee’s S.A.E. was at Dillwyn Repair Service in Dillwyn. Agee was one of four finalists that completed a final interview at the National Convention in addition to his application. In June, Agee was announced as the state winner of his area for Virginia which qualified him to advance to the national level.

Amanda Bryan received her American Degree on the final day of the convention. The American Degree is the highest degree that an FFA member can earn and has a lengthy amount of requirements including working in an agriculture related career, agricultural education and community service. Bryan works for The Pine’s Farm and is a student at Virginia Tech majoring in agriculture business and agriculture science with a concentration in community leadership and development. Bryan is also minoring in leadership and social change, international agriculture, and political science. The American FFA degree is awarded at the National FFA Convention & Expo each year to less than 1% of FFA members, making it one of the organization’s highest honors.

The National FFA Organization provides leadership, personal growth and career success training through agricultural education to more than 700,000 student members who belong to one of the more than 8,600 local FFA chapters throughout the U.S., Puerto Rico and the U.S. Virgin Islands. The organization is also supported by more than 8 million alumni and supporters throughout the United States.

On Nov. 9, Joelle Dension of the Richmond Justice Initiative was the guest speaker of the Judith Randolph-Longwood Chapter, Daughters... read more