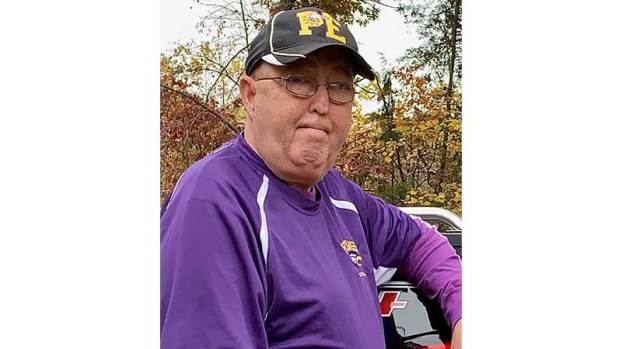 Prince Edward County Middle School (PECMS) football players need look no further than their own head coach for living proof that one can press on and thrive amid challenging circumstances.

Eagles Head Coach Chris Gunter, who just finished his second year leading the team, was diagnosed with lung cancer in January 2018 and has been taking chemotherapy treatments every three weeks since February of that year.

He noted that he has a tumor in the bottom of his right lung and added that he is diagnosed with stage four cancer, which, for quite a few types of cancer means it has spread.

“It has spread a little bit to my lymph nodes in my chest and in my spine,” he said, but he noted that a report from November 2018 indicated that the spots on his spine had healed to a point where doctors can hardly see them anymore.

Gunter provided an update on how he is doing in late October 2019.

“I feel great,” he said. “It’s just when you take the chemo, it takes a lot out of you for about five or six days.”

And yet he’s never missed a game.

“No, sir, never missed a game, and hopefully it sticks that way,” he said.

He explained what it is like managing a football practice schedule, game schedule and all of the responsibilities that come with the head coaching position while also doing chemo every three weeks.

“That’s where your assistant coaches come into play,” he said. “Let me tell you, I’ve got the best assistant coaches that you could ask for. I think I’ve missed, at the most, three practices this year because of being sick, and those guys have stepped in and have been awesome — couldn’t ask for any better.”

His assistant coaches are Will Simmons and Michael Dupuy.

Pointing to what has helped him persevere as he coaches and fights cancer, Gunter said, “My family has been a big support. Coach (Larry) White has been a big support, really has pushed me. I’ve been doing it for so long I can’t imagine not doing it. The kids have really been keeping me going.”

He shared a story about a player who spends the summer living in Texas with his father.

“I think it was like the second week after school was out, this kid called me three nights a week, every night at 9 o’clock on the dot to check and ask me how I’m doing, ‘What did the doctor say?’” Gunter said. “… For him to do that, I told him when he came back to school this year, I said, ‘You know what, that really meant a lot to me, you calling. You don’t really know how much that meant.’”

Another great help to Gunter has been his friendship with White, who founded the PECMS football program and now serves as head coach of the Prince Edward County High School varsity football team. Gunter noted that he and White have worked together as coaches off and on for 19 years.

“I actually coached with him, I want to say, 10 years over at Buckingham in the youth league,” Gunter said. “He got me started over there. And then he left, and he started the (Prince Edward) middle school program, and then he called me and says, ‘Hey, I need you to come over,’ so I went over the second year.”

Gunter said he served as a PECMS assistant football coach under White for nine years before moving up to head coach when White took a position as head coach of Buckingham County High School’s junior varsity football team.

“I can’t ask for a better friend than Chris,” White said. “And when I left the middle school, he was the one that I chose to take over my spot. I owed that to him.”

Speaking of White, Gunter said, “He’s been a big influence. He’s really been a big help.”

White said Gunter has “had my back ever since he first started coaching. … He’s a good guy, real good guy. He would give you the shirt off his back. … He’s been in good spirits as far as having this lung cancer. He doesn’t let it get him down. He’s a fighter. It’s very emotional to me because that’s my best friend, and I hate to see him going through it, but like I said, he’s fighting it, he’s in good spirits with it.”

Gunter stated that the school has been great to him as well.

“The administrators at the middle school have been very supportive too,” he said. “They know the situation, the kids know, and I’ve tried to keep them updated on how I’m doing and how I feel, and my assistant coaches have told me that they’re going to come back next year, and that’s a big kick in the butt right there to keep me going.”

PECMS Athletics Director Brandon Kenny said, “He did well for us this year and plans to continue coaching as long as his health will allow it. He cares so much about football and our middle schoolers who play it. I’m fortunate to be able to work with him. He’s a good coach and even better person.”

Gunter’s wife, Melody Gunter, has been with him each step of his battle with cancer, noting that he fights every day, and she expressed tremendous gratitude for the opportunity afforded to him as the football head coach at PECMS.

“Football is what keeps my husband going and many, many prayers,” she said. “I honestly don’t know how he has been as strong as he has based on the amount of chemo going into his body and how sick he’s been to finish out this football season. The players, the assistant coaches and the whole Prince Edward family just keeps him going. I thank everyone for allowing him to focus on his greatest passion, and he doesn’t give any time to cancer.”

As for making determinations about his coaching future, Chris Gunter is once again setting an example for his players by putting a classic football coaching maxim to work: Take one day at a time.

“I told my wife that after this, I have to evaluate myself at the end of every year, and I have also told my assistant coaches, if it comes to a point where I feel like I can’t give it 110 percent, then it would be time for me to step away,” he said. “It would be hard, but I feel like if you can’t give it 110 percent, then you’re not doing anything for the kids. So, right now, the way I feel, I can say, ‘Yes,’ I’ll be back next year. But the way things are right now, I have to take one day at a time.”