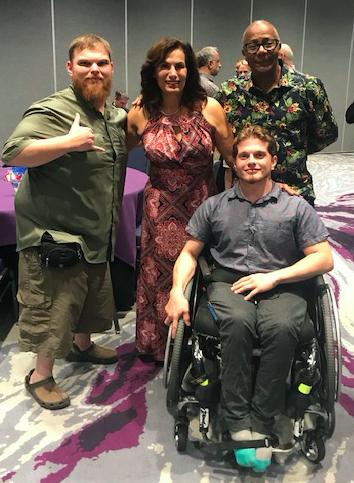 Posing for a picture at the recent Jujitsu America Annual Convention in Orlando, Florida are, from left, Joshua Corbett, Graciela Casillas, who is in the Black Belt Hall of Fame; Lonnie Calhoun and Zachariah Kowalski.

Licensed martial arts instructor Lonnie Calhoun III and two of his students participated in the Jujitsu America Annual Convention earlier this month in Orlando, Florida. The event featured some of the finest martial arts masters from around the world.

The three-day event consisted of tournaments, clinics and seminars – including many styles of martial arts and healing arts.

Sensei Calhoun, who teaches Danzan Ryu, American Combat and Castoldi Jujitsu at the Southside Virginia Family YMCA in Prince Edward County, was asked to teach “How to defend one’s self with a limited range of motion.”

Consequently, Calhoun’s students, Zachariah Kowalski, who is a paraplegic from the waist down and a wheelchair user, and Joshua Corbett, who has cerebral palsy, which affects movement and muscle tone or posture, did demonstrations of self-defense techniques for their specific limited range of motion.

“Typically, you go to a martial arts facility and people who are there, for the most part, are physically mobile,” Calhoun said. “But you rarely see people in the class who are limited in mobility.”

But that doesn’t mean they can’t and shouldn’t be there, said Calhoun, who was taught by professor Tony “the Bear” Maynard, former Hand to Hand Combat Instructor with the Marine Corps, and professor Wally Jay, founder of Small Circle Jujitsu and a protégé of movie and martial arts star Bruce Lee.

Martial arts can help deal with self-doubt by building confidence. “Kowalski and Corbett have studied with him for years and are among his longest-tenured students,” Calhoun said.

Calhoun teaches what is called Close Quarters Combat Jujitsu, known as CQCJ. The style blends the striking techniques of both Karate and Kung Fu and practical and street smart techniques.

CQCJ utilizes simple techniques that employ leverage and body mechanics to deliver maximum output and pain with the least amount of effort. It is considered ideally suited for law enforcement, women, young adults, seniors and martial artists considering expanding their knowledge of the arts.

What all that means is that during their class, 6:30 p.m. Wednesday’s at the YMCA, his students are learning “real-world self-defense,” Calhoun said. “Any kind of situation you can get yourself into, and situational awareness.”

And even with limited mobility, Calhoun said, “You don’t give up yourself to a bad person.”

For wheelchair user Kowalski that means staying back in his chair and keeping his base, not reaching out to strike but pulling the attacker in. For Corbett, his cerebral palsy means he fights like his shoe strings are tied together.

Calhoun said his student’s exhibitions were well received, and both men gushed about participating.

“In summary, I found that the trip to the Jujitsu America (JA) Annual Convention was a very welcoming experience as well as a plethora of knowledge and insight. I would gladly attend any event held by the JA community,” Corbett said.

Added Kowalski, “There is a lot I could say about the JA Convention. To sum it up I’d say I was humbled by the sense of camaraderie and support at the Jujitsu America Convention. I originally started practicing Jiujitsu six years ago as a form of exercise. Jiujitsu is an art that has no limitations, and it has given me a sense of safety and confidence when traveling alone. I just want people to know that through hardship comes strength and knowledge.”

The Virginia Department of Transportation has issued a traffic alert for the Lynchburg District for the week of Nov. 4... read more