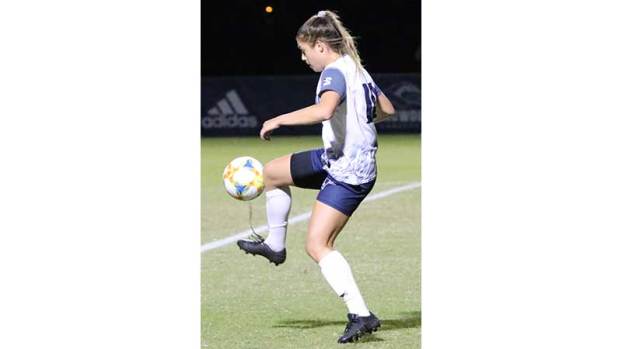 Longwood University senior forward Emilie Kupsov, pictured from a previous game, starred in her final appearance on the pitch as a Lancer on Saturday evening, Nov. 2, in Radford. She was part of a senior class that helped the program earn berths in the Big South Conference Tournament for four consecutive years, including a championship game appearance in 2017. (Photo by Titus Mohler / Herald)

In the postseason, experience counts, and reigning champion Radford University tapped into its supply early enough to get the jump on Longwood University’s women’s soccer team and survive a second-half rally from the Lancers to earn a 3-2 win Saturday evening, Nov. 2, in the Big South Conference Tournament quarterfinals at Cupp Stadium, a Longwood Athletic press release cited.

Seeded third overall in the Big South bracket, the Highlanders (14-5, 7-3 Big South) struck twice within the first 30 minutes of the first half and then got the eventual game-winner from Gabi Paupst in the 63rd minute before surviving a late Longwood onslaught that saw the Lancers score two goals in the game’s final third, the release noted.

Officials highlighted in the release that Longwood (6-9-2, 4-4-2 Big South) controlled the final 25 minutes of the game, cutting the three-goal deficit to one behind goals from senior Emilie Kupsov and freshman Kiersten Yuhas, but Radford’s Big South-leading defense, led by Big South Defensive Player of the Year Kayla Thomas, did just enough to hold off that charge until the final whistle.

“Wow, we certainly made a game of that in the second half,” Longwood Head Coach Todd Dyer said in the release. “Radford dictated in the first half and deserved that lead. We had to do something, so we changed our system, going with only three defenders, and we were able to swing the momentum of the game in our favor.

“We showed fight and grit to the very end, but we just ran out of time.”

In a rematch of a regular-season showdown that Longwood took 1-0 in Farmville, No. 3-seeded Radford erased the possibility of another Lancer shutout in the 25th minute when senior forward Nelia Perez punched in her team-leading 11th goal of the season to put the Highlanders up 1-0, the release stated. Brianna Oliver followed with another strike four minutes later to extend that lead to 2-0, and after halftime, Paupst stuck in a cross from Perez to put Radford up 3-0.

However, the Lancers regrouped immediately and went to Kupsov, who created her own shot outside the box and drilled home a line drive into the opposite corner of the net, officials cited in the release. In breaking the scoring drought, Kupsov ignited Longwood’s offense, which scored again 13 minutes later when Yuhas cut Radford’s lead to 3-2 on an unassisted goal that was her first of the season.

The release noted that Longwood maintained that pressure for the remainder of regulation, uncorking four consecutive shots within a four-minute span that led into the 84th minute. However, Radford All-Big South goalkeeper Courtenay Kaplan saved two of those while the Highlander defense blocked another to preserve the lead and send the Highlanders back to the semifinals for a second straight year.

With the win, Radford moves on to face No. 2 Campbell University, which beat Presbyterian College 3-2 in double overtime Saturday, the release stated.

The loss concludes the 2019 season for Longwood and caps the four-year careers of Longwood’s three-woman senior class of Kupsov, Taylor Alvey and Erica Sieben, officials said in the release. Those three helped Longwood to four consecutive Big South Tournament berths, including a championship game appearance in 2017, along with a 35-30-10 overall record and a 21-10-7 mark in Big South play. The Lancers finished .500 or better against conference foes every year of their tenure.

“I’ve never seen so many tears after a game, but that just shows how much this group loves each other,” Dyer said in the release. “We didn’t quite reach our destination, but the journey together was worth every second.”