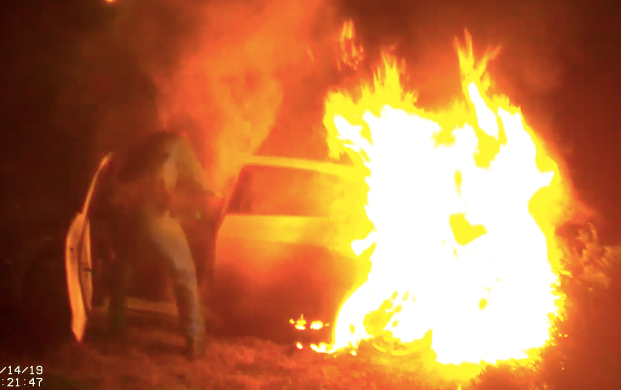 Pictured is a still image from Officer Olivia Martin’s bodycam video as she arrived on scene. To see more of the video visit www.FarmvilleHerald.com.

According to a release from the Town of Farmville Police Department, units responded at approximately 4:18 a.m. on Thursday, Nov. 14, to a single-motor vehicle accident in the 1600 block of East Third Street. Officer Dalton Foley arrived on scene to find the vehicle, a 2016 Buick, engulfed in flames.

The release stated that heavy smoke was pouring from the car’s passenger side as Foley approached the vehicle, discovering an unconscious female in the driver’s seat. Foley cut the woman’s seat belt and pulled her from the vehicle.

Officer Olivia Martin, the second officer to arrive on scene, checked the car for other occupants before she and two citizens assisted Foley in moving the victim to a safer distance. The heroic rescue made national news with live police bodycam footage provided by the Farmville Police Department.

The woman, age 57, was the only person inside the vehicle. According to the release, she was transported to Centra Southside Community Hospital by the Prince Edward Volunteer Rescue Squad before later being flown by helicopter to Virginia Commonwealth University (VCU) Medical Center in Richmond.

The release cited that the woman’s condition is critical, but stable.

The cause of the accident, according to police, remains under investigation at this time.

The Farmville Herald has reached out to officers Martin and Foley but have not received comment as of press time.

Warning: The Farmville Herald was provided with the following police bodycam footage. The video could contain graphic language.