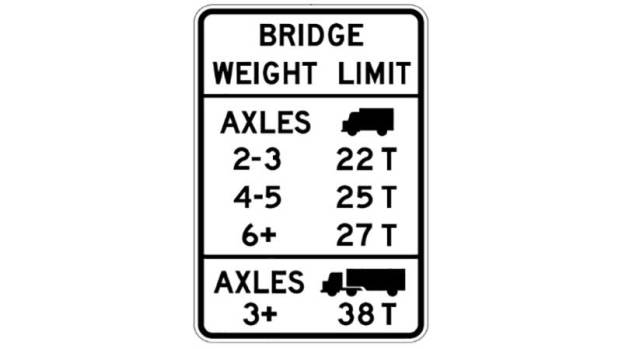 Above is an example of signage that drivers may encounter at bridges with newly posted weight restrictions. VDOT is working with local stakeholders to reduce industry impacts as a result of some weight changes.

Many bridges across multiple counties are seeing a change in their weight limit signs after a statewide evaluation by Virginia Department of Transportation (VDOT).

According to an information brief by Christopher Williams, assistant division administrator for the Structure and Bridge Division in VDOT’s central office in Richmond, the changes are primarily a result of the advancement of modern day vehicles that have been developed to carry heavier legal loads. These vehicles include freight vehicles/special hauling vehicles (SHV), as well as emergency vehicles (EV).

The brief cites that more than 21,000 bridges are scattered across the commonwealth, ranging in age from 100 years old to less than one year old. VDOT modified its bridge design practices in 2007 as a result of SHVs becoming more widespread. However, the dramatic age range in bridges means that the majority of Virginia’s bridges were built before this design standard was updated. Many SHVs can have anywhere between four-seven axles and even some EVs like firetrucks are three-axle vehicles, meaning that these bridges are seeing increasingly heavy loads that they were not necessarily intended for.

As a result, VDOT has evaluated local bridges for SHVs and EVs. A number of bridges have received changes in their previous posted weight limits or have had signs posted where no weight limit was posted before.

The brief advises that there may be some industry impacts as a result of these new postings, and that SHV and EV drivers may need to revise routes in order to avoid structures/bridges with new or updated weight restrictions.

“Some affected structures may already be in VDOT’s State of Good Repair program,” the brief advises, “which means they would qualify for funding to complete upgrades. For those that are not in that program, it will be determined if something can be done to reduce impacts.”

The brief also states that VDOT is working to develop a GIS tool called “Truck Web” that will allow industry partners to identify any issues along routes and determine an alternative route if needed. When launched, Truck Web will be housed on VDOT’s external website, although a go-live date has not yet been announced. VDOT districts are also communicating with local stakeholders about specific impacts.

Signs that drivers should look out for will require them to distinguish their weight limit by axle count and gross vehicle weight. When determining which category a vehicle falls under, movable axle configurations apply only if the axle is lowered. For example, a truck with four lowered axles and two raised axles must abide by the weight restrictions for four-axle trucks, according to the information brief.

“One thing I do want to stress is that it’s a safety thing,” said Scott Frederick, resident engineer for the Farmville residency of VDOT. “If we didn’t have to do it we wouldn’t do it, but when the bridges were designed the vehicles were a little bit different, so it’s a matter of public safety.”

Drivers can view a reference sheet that provides details about weight restrictions, vehicle types and examples of signs and how they should be applied by logging onto www.dmv.virginia.gov/commercial.

A Farmville man was sentenced Nov. 7 to nearly eight years in prison for the illegal possession of 40 firearms... read more