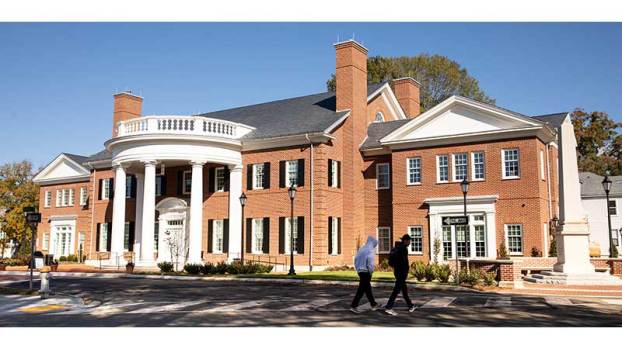 A stunning new home for Longwood University admissions opened its doors to the community this week, drawing praise for its warm and welcoming interior and for its classic architecture that echoes the historic character of High Street, a Nov. 25 Longwood press release stated.

Officials noted in the release that the building complements — and offers stunning views of — Longwood’s famed Rotunda. Its public opening comes at the height of a busy campus visit season for prospective students.

Radcliff Hall was formally dedicated Saturday, Nov. 23, in honor of Marianne Radcliff, a 1992 Longwood graduate and a visionary Longwood rector and committed alumna whose tireless work and advocacy have led to critical investments in Longwood’s physical campus, historically low tuition increases, a reimagining of general education with a central focus on citizen leadership, and increased investment in the university as higher education rises to meet the challenges of the 21st century, the release highlighted.

Radcliff joined current board members, family and colleagues including Virginia Gov. Ralph S. Northam for the dedication ceremony, the release cited. An influential leader in public affairs in Virginia, Radcliff was a campus leader during her days as a first-generation college student, and she later served the maximum two terms on the Board of Visitors of her alma mater, including two separate terms as rector, concluding the second term this past June.

“Marianne has been a galvanizing force driving Longwood’s progress and development over the last eight years,” Longwood President W. Taylor Reveley IV was quoted as saying in the release. “It is with the help of her tremendous efforts, working with policymakers in Richmond including the governor’s office and the General Assembly, that we were able to secure state funding for this building in 2016. She saw clearly the need for a welcoming building that imparts a sense of place to prospective students and worked to prioritize its construction amid so many competing pressures. She manifests the spirit of Longwood, and we are so proud the admissions building will bear her name.”

Officials pointed out in the release that the 18,466-square-foot building fills a distinct need on campus — a true home for the admissions department and an inviting place for prospective students and families weighing options for higher education.

“What Longwood has done is create a true front door to our campus,” said Longwood Dean of Admissions Jason Faulk. “When visitors and prospective students first experience Longwood, they are walking into a place that celebrates the things that make us distinctive and great: our incredible history, our enthusiasm and camaraderie, our sense of place, our strong ties to downtown Farmville and our commitment to changing communities through building citizen leadership.”

Those attributes are prominent in the Farmville Freedom Monument dedicated in 2018, which stands outside the building, the release noted. Inside the new building’s expansive lobby, the monument is complemented with a series of photos and stories that tell the consequential history of Longwood and the surrounding community — a place where young people’s bravery and sacrifice sparked a nationwide change for civil rights, and where the final days of the Civil War played out along the northern border of campus.

From Patrick Henry’s service to Prince Edward County at the Virginia convention to ratify the Constitution in 1788, to the bravery of teenager Barbara Johns, who led the student strike in 1951 to protest conditions at segregated R.R. Moton High School, which became part of the 1954 Brown v. Board of Education Supreme Court decision, the stories and pictures give visitors a sense of Longwood and Farmville’s place in American history, the release stated.

Among the stories displayed is that of Dr. C.G. Gordon Moss, the dean of Longwood College during Massive Resistance who was an outspoken opponent of the Prince Edward public school closings and who was a proponent of integration, officials said in the release. For his views, Moss suffered ostracism, losing prominent positions in the community and enduring calls that he be fired, but he stood with his convictions and helped usher in lasting change in the county.

The release cited that a quote from Reveley’s address at the dedication of the civil rights monument appears outside the entrance to the main presentation room:

“Longwood’s campus is one of the great treasures of Virginia and America as a whole. The core Longwood experience of camaraderie and living and learning amongst one another remains a thing of unsurpassed value and importance. This is a special place, and we must nurture it carefully for the future.”

Faulk said in the release, “I like to think of the building itself as a marriage of old and new Longwood. The architecture is very much in line with the historic buildings on High Street, but inside is a modern space that is a technological wonder. Our presentation and meeting rooms are among the best and most flexible I’ve ever seen, and the open floor plan of the lobby gives it a freshness that makes people feel like this could be home.”

The building was designed to be comfortable for small tour groups or large admissions events like Crash on Campus, which brings hundreds of high schoolers to Longwood for an overnight stay every March, the release continued. Two presentation rooms, a large-scale hall with seating for up to 300 and a smaller room that can hold 50, will give admissions staff the flexibility to host multiple groups of families at once. And the spacious lobby provides comfortable seating for waiting parents and friends.

“A week after the staff moved in, we had an open house for about 200 families that was really going to put the space through its paces,” Faulk said in the release. “We were very proud of the new building and heard nothing but great feedback from prospective students and parents, who said it was the best experience in the state. I couldn’t be more excited to welcome them to Longwood in such style.”

Radcliff was appointed to the Board of Visitors in 2011, the release stated. Her leadership skills were apparent early in her tenure, and one of her earliest tasks was guiding the presidential search committee that brought Reveley to Longwood in 2013. It was a turning point for the university, she said in a 2019 interview with the alumni magazine as her term on the board was concluding.

“When I became rector, Longwood was in a situation where it had a number of different directions it could go,” she said in the release. “You heard a lot of talk about giant online classes and about how we could get much bigger and how students need to be prepared for one specific job they’ll get right after school. With those pressures increasing, everything that’s so great about Longwood, everything that was so valuable to me as a student, had to be strongly affirmed. We had to say unapologetically, ‘This is who we are, we’re really good at this, and we don’t have to chase after those other things to do something really powerful here.’”

In conclusion, the release noted that Radcliff Hall was designed by Glavé & Holmes Architecture of Richmond. It is certified LEED Silver, employing recycled materials in construction and reducing energy and water usage within the building.

The Commonwealth Chorale will continue its tradition of bringing great music to area audiences with an exciting performance of Handel’s... read more