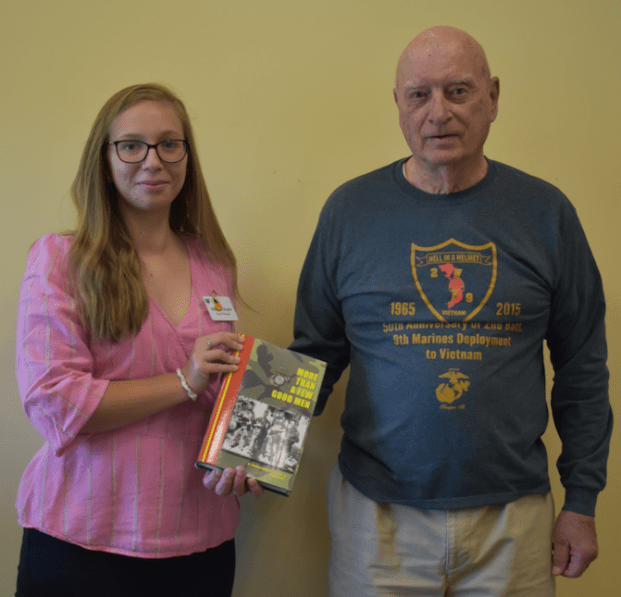 Lt. Col. Robert J Driver Jr. moved to Farmville from Brownsburg only a few months ago in order to be closer to his family. While adjusting to a new life here in town, he made the decision to donate a copy of his book, “More Than a Few Good Men,” to The Barbara Rose Johns Farmville Prince Edward Community Library.

Driver’s book is an epistolary autobiography. While it covers everything from his childhood to eventual retirement, the majority of the novel is an account of Driver’s two tours in Vietnam during his career in the U. S. Marine Corps.

Driver has written over 17 books detailing the regimental histories of Confederate units in the U.S. Civil War, mostly from Virginia and Maryland. He stated that he first felt compelled to write “More Than a Few Good Men,” however, after going to a Marine Corps reunion.

“I started going to reunions in (Washington) D.C.,” explained Driver. “There was a Marine who had lost his leg up there (in Vietnam). He remembered everything that happened to the company when I was there and after I left. When he died, of course, all that information died with him. I made a statement, I said, ‘I need to write a history of the unit,” and I proceeded to do so. It’s mostly about my two tours in Vietnam, but it also covers my entire Marine Corps career. Fortunately, my wife saved all my letters that I wrote her over the years, so I was able to refer back to them. I wrote her almost every day.”

Driver worked tirelessly to organize and transcribe the letters written between him and his wife, Edna, during Driver’s time spent overseas. He additionally relied upon the accounts of fellow Marines at annual reunions in order to gather information for the book, including photographs that are scattered throughout the pages of the novel.

“More Than a Few Good Men” details both the hardship and success that Driver experienced during his military career, from the loss of many of his men to the birth of his two children. Although not for the faint of heart, his pages are a real life recollection of the effects of war from trench to home and back again.

On Saturday, Nov. 9, the 244th birthday of the U.S. Marine Corps, Driver ventured to the library in order to donate his book. “I thought it would be appropriate to donate it on the Marine Corps Birthday,” Driver said in reference to his work. “It pretty well covers what went on over there from a Marine’s perspective. There were a lot of other things going on, but what the Marines were doing, I pretty well covered everything that they were involved in. We were in combat most of the time.”

Driver added that students or other individuals interested in the Marine Corps or the Vietnam War may be interested in his book. He hopes that people will borrow his work from the library and be able to experience some of his wartime memoirs.

Library Branch Manager Morgan Hayes posed for a picture with Driver and accepted his book on the library’s behalf. “It’s always really great when community members write stuff and donate it to the library, so that we can keep it for them and for future generations,” Hayes stated.

There will be no change in the residential or business routes on the Monday, Tuesday or Wednesday schedule. However, for... read more