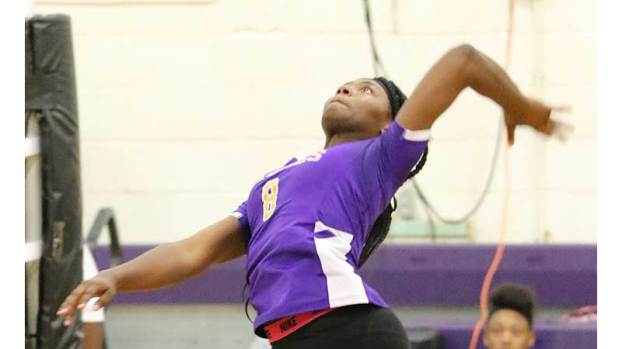 Prince Edward County High School’s No. 9-seeded varsity girls volleyball team upset host No. 8 Nandua High School 3-0 on Nov. 5 to advance past the first round of the recent Region 2A Tournament before falling 3-0 to host No. 1 Bluestone High School on Nov. 9.

“They really showed up and played really well at Nandua,” Lady Eagles Head Coach Katrina Walker said. “Nandua was really good; their structure, communicating on the court, was really good. I guess they just really couldn’t bring it all together, but my girls played probably one of the best games that they have played all season when we went to Nandua.”

Prince Edward finished the 2019 season with an overall record of 7-13.

Against Bluestone in the regional quarterfinals, “we were leading in two of those sets, but they just came back and beat us,” the coach said. “So I really hope that the girls that are coming back next year understand that although they may only play volleyball during the season, it doesn’t matter. But when you put your skills together, they can accomplish anything.

“And it definitely showed that at Nandua,” she continued. “It definitely showed that when we played Bluestone in that last regional game. I heard the Bluestone (junior varsity) JV coach saying how well my girls hustled on the court, and every time we played Bluestone, their varsity coach complimented my players on the things that they did well, like passing the ball really well, which they did. They passed the ball really well that game to the setter so we could get some of our hitters up at the net.”

Highlighting players that led her team on and off the court this year, Walker said, “(I’d) definitely have to go with Makayla Morris, and then there were some other girls who stepped up. Walle Brito Raia, who only played about nine games with us because she also does soccer, she was excellent when it came to serving, and when she played, she became our setter, so she did well in that position.

“And I would also say Kyla Edmonds, because Kyla is a hustler,” Walker continued. “On the court, I know that if a ball goes out of bounds, if we can get that ball back in the court to Kyla, Kyla’s going to get that ball over the (net), and she did those things. Her serving was great, and I tell you, this girl is probably about 4 feet, 11 inches (tall), but she plays front row, and she could jump and she would land some good hits, and she was landing some hits that girls weren’t even getting. So it just goes to show that height means absolutely nothing.”