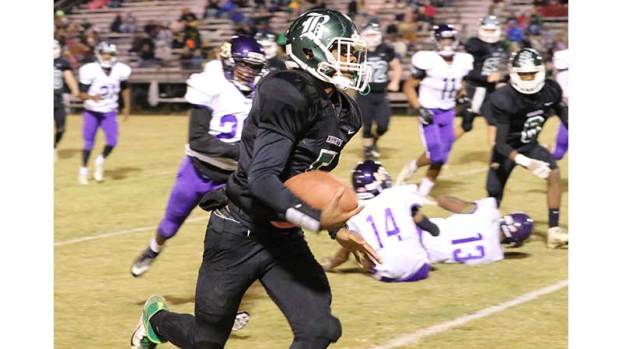 Buckingham County High School’s varsity football team scored on the ground, through the air and via special teams to take a 35-0 lead by halftime Friday night, Nov. 1, and visiting Prince Edward County High School showed competitiveness in the second half, but the Knights ultimately prevailed 35-22 to improve to 8-1 on the season.

“We were able to come out to a lead at the beginning and returned the opening kickoff,” Buckingham Head Coach Seth Wilkerson said.

Returning the opening kickoff 85 yards for a touchdown was freshman Kenneth “K.J.” Williams.

Acknowledging that his team earned a 35-0 lead at the break and that he and his staff were rotating other players in during the second half, Wilkerson said, “I thought, overall, we did a decent job.”

Knights junior quarterback Gerry “Tae” Toney was outstanding, as usual, showing he could help put up points with his legs and his arm. He finished with eight carries for 71 yards and two touchdowns, and he also went 4-for-6 passing for 56 yards and a touchdown.

“We were able to complete a few passes and get that going and (were) still able to run the ball, and he’s doing a good job for us,” Wilkerson said of Toney.

The quarterback was limited by injury last year, but he has stayed healthy this season, allowing Buckingham fans to consistently see the tremendous impact he can make.

Copeland also had two receptions, one of which was for a touchdown.

Wilkerson spoke to what Copeland brings to the team.

“Returning punts, he’s been doing a good job of that,” the coach said. “He can really play a lot of different positions — receiver, he runs the ball some and returns kicks for us and plays corner on defense. So there’s a lot of different things he can do to help us.”

The Knights are a strong team featuring a great deal of experienced players, but nevertheless, Williams has managed to earn some significant playing time as a freshman.

“He gets a lot of time at receiver and is mainly getting a lot of time as a corner,” Wilkerson said. “… I think he’s got a lot of potential to be a good player here for three more years.”

The Eagles performed true to how Prince Edward Head Coach Larry White said they would, not lying down to the elite Knights but rather challenging them.

Wilkerson pulled his starters after one series in the second half, but even so, the Eagles made significant inroads on the scoreboard in the last two quarters, led by sophomore quarterback Nate Reed and his remarkable athleticism.

Buckingham’s coach made a point of praising the Eagles.

“They came out after halftime and kept playing and played hard and were able to score three times (in) the second half,” Wilkerson said.

The Knights were ranked second in Region 2B last week behind Stuarts Draft High School, which is now 9-0. Buckingham is in position to host a playoff game, but before it can start focusing on the postseason, it needs to take on host Nottoway High School on Friday, Nov. 8, at 7 p.m. in the Knights’ regular season finale.