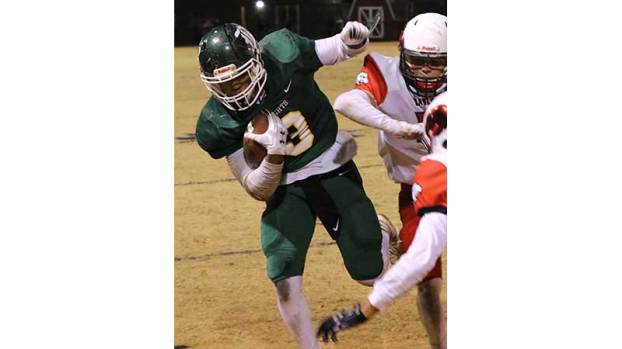 Buckingham County High School junior running back Xavian Gough evades East Rockingham High School defenders to gain a few more yards Friday night during the Region 2B semifinal in Buckingham. The No. 2 Knights fell 41-17 to the defending regional champion Eagles, who hold the No. 6 seed this year. (Photo by Titus Mohler / Herald)

Buckingham County High School’s varsity football team kept things close against visiting East Rockingham High School on Friday, Nov. 22, through two quarters, but the defending Region 2B champion Eagles were able to pull away in the second half for a 41-17 regional semifinal victory that ended a stellar season for the resurgent Knights.

“I was proud of the way my guys hung in there, and they fought, and they played every play,” Buckingham Head Coach Seth Wilkerson said. “(The Eagles are) a good team, can’t take anything away from them. … They made plays.”

Their first play from scrimmage was a 68-yard touchdown run by senior running back Trenton Morris.

The No. 2-seeded Knights were able to respond shortly thereafter, however, as junior running back Xavian Gough helped even the score with a 29-yard touchdown run.

The No. 6 Eagles, now possessing an 8-4 record, led 14-7 at halftime. They received the ball to open the second half and were advancing the ball down the field when they fumbled, and Buckingham recovered.

On the ensuing drive, Morris ran for a 53-yard touchdown to help give his team a significant 21-7 lead midway through the third quarter.

Buckingham was able to cut into the advantage with a 27-yard field goal by junior kicker Wesley Snoddy that made the score 21-10 with one minute, 42 seconds left in the third quarter, but then the Eagles were able to score 20 straight points to seal their return trip to the regional title game.

The Knights were dealing with injuries to some key players, including star senior linebacker/running back Walter Edwards, who saw somewhat limited playing time Friday, particularly on defense, but Wilkerson noted that injuries were not a new challenge facing his team.

“I tell our guys we’re not making excuses,” he said. “We’ve had a few guys banged up for the past three or four weeks, probably at least five or six guys banged up, and I told them how much I appreciated them coming out here and practicing and playing these games when a lot of them weren’t close to 100%. But I can’t take anything away from East Rock. They made plays and played hard and hats off to them.”

The Knights finished the 2019 season with an overall record of 10-2, advancing a step beyond their 2018 counterparts, whose run ended in the regional quarterfinals. The 2019 Buckingham squad was regularly dominant during the course of the regular season, averaging 36.3 points per game and winning by an average of 27.6 points. Then the Knights won the program’s first playoff game since 2015 when they defeated visiting No. 7 Page County High School 20-19 in overtime Friday, Nov. 15, during the Region 2B quarterfinals.

“I think it’s a great way to put us back on the map where we belong,” he said.

Edwards noted that he will remember this team and this season for “the way we fought through everything, the 20 guys that showed up every day. Nobody else did that, and we just fought. It’s one to remember, and I know the class of 2021 will do just as good if not better, and I can’t wait to come back and watch them play.”

Reflecting on what he will remember about his 2019 players, Wilkerson said he would remember “just the way they were able to come back from last year. We were 6-5, and we knew we had something special last year, and we knew we had a good group coming back, and we lost five seniors this year — and five good seniors — and then we’ve got a good group of juniors coming back next year with the sophomores. The future’s looking bright. I think we’re getting things back on track here.”

Buckingham County High School’s current varsity football players did something they had never done before last week by achieving a... read more