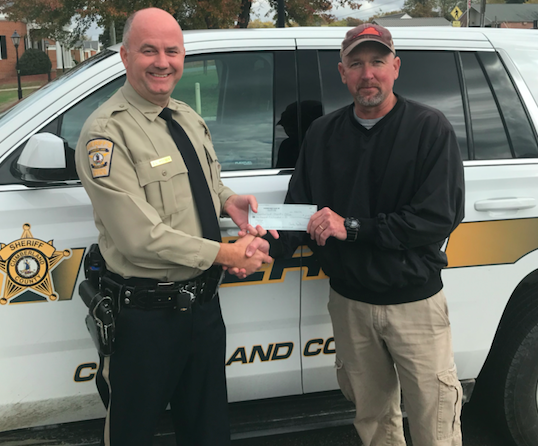 Cumberland County Sheriff Darrell Hodges, left, accepts a check for $1,500 from Square Hunt Club member Eric Gilbert. The money will go toward the sheriff office’s Shop with a Deputy program.

Hunt club donates to cause

For 12 years the Cumberland County Sheriff’s Office has put on its annual Shop with a Deputy program in which officers take local children out to shop for clothing and Christmas gifts. This year, a generous donation from Cumberland’s Square Hunt Club will allow the sheriff’s office to bring Christmas to even more kids.

“We started doing a Shop with a Deputy program where we took deserving children who might not be getting a Christmas, we take them Christmas shopping,” explained Cumberland County Sheriff Darrell Hodges. “We spend $100 on each kid, and what we do is we make sure they each have clothes first, you know, and then after we get them a complete outfit of clothing, then we buy them something, a gift of some sort.”

According to Hodges, the sheriff’s office was able to help 66 kids last year.

The Square Hunt Club is a group that mainly hunts with hounds on the southern end of Cumberland County. Kevin Meadows, secretary of the club, said that he and the other members admired the work done by the sheriff’s office and wanted to get in on the holiday spirit.

Square Hunt Club held a fundraiser in the form of a reverse raffle, advertising that a portion of the proceeds would be donated to Shop with a Deputy. The fundraiser featured dancing, a DJ and heavy hors d’oeuvres.

After a successful night of fundraising, the club presented the sheriff’s office with a check for $1,500.

Hodges expressed his gratitude to the club, stating that the money donated would provide 15 children with gifts and clothing for the holidays.

“We want to support the sheriff’s office, because they support us as hunters and hound hunters,” said Meadows. “We’re a part of the community, and we want to give back to the community.”

“It’s really special,” said Hodges in reference to the Shop with a Deputy program, “because every time almost every child, they don’t really care about the gift. They say, ‘Can I get mama something?’ or ‘Can I get my daddy something?’ They are really, truly special kids, I tell you.”

The Town of Farmville Police Department has been awarded the Commonwealth of Virginia Byrne/Justice Assistance Grant to help in the... read more