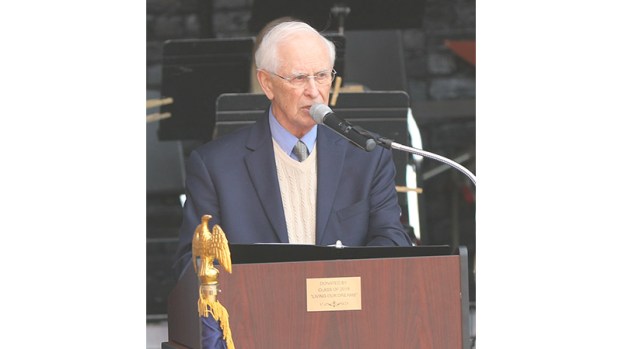 Hope that hits close to home

Military veterans and other area residents of all ages gathered at Crute Stage on Monday, Nov. 11, for Fuqua School’s Community Veterans Day Program that featured musical numbers and remarks from students, a benediction from Fuqua Head of School John Melton and a keynote address from Bob Gillette highlighting hope rooted in local history.

The music was performed by the Fuqua School Middle School Bands and the Fuqua School Senior Band, and narration for “Within These Hallowed Halls” was provided by Fuqua Upper School Head Jennings Custis.

“One of the things that I love about our community is we leverage each other’s resources to pull together programs like this for the benefit of the greater good and to create an opportunity you couldn’t otherwise provide in a small town,” Melton said after the program had concluded.

The event became a reality with contributions from the Town of Farmville, Tom Hicks, Fred Hill and the Veterans of Foreign Wars Post 7059, Audrey Sullivan and Red Door 104 and Becky Kelly and the Piedmont Virginia Chapter of the Military Officers of America Association, among others.

“One of the things I was especially excited about this year was to bring to light this new story that happened right under our noses but most people don’t know about,” Melton said.

He was referring to the historical account that Gillette, a noted author, had researched and shared in his address.

“Drive 20 minutes east of Farmville to Burkeville and south six miles to West Court House Road,” he stated in his speech. “Stop and get out of your car to read the metal roadside plaque which stands near the sign for Hyde Park Farm. It is a Virginia and National Historic Site Marker. The sign gleams as it reflects the sun, but it seems to pulsate because it tells the story of suffering, courage, hope and rescue. It tells an American story, a Virginian story.”

Gillette noted how after World War I ended, all was not well in Germany.

“Hitler’s Nazis spread the disease of anti-Semitism that steadily increased throughout the 1930s,” he said. “For German Jews, life deteriorated rapidly.”

He described how their freedoms were curtailed and how life became joyless for them.

In an effort to help its children, the Jewish community created agricultural training schools, reasoning that countries needed well-trained farmers, so visas to immigrate might be granted to the teenage children, allowing them to escape Nazi Germany.

“Werner Angress was one of those Jewish teenagers,” Gillette stated. “In 1936, at the age of 16, he left home to study agriculture at a school named Gross Breesen.”

“In Richmond, in the late 1930s, department store owner William B. Thalhimer worked to settle German refugees in America,” Gillette cited moments later. “He became the head of all German Jewish resettlement in the country. He learned about one training school, Gross Breesen, and he set out to rescue its teenagers. … He purchased a large farm in Burkeville and anxiously waited for students to be admitted into the United States.”

He ended up having to engage in a David-versus-Goliath fight with the U.S. government and the anti-Semitism present therein, which limited immigration opportunities for the people Thalhimer was trying to help, Gillette noted. But Thalhimer ultimately prevailed, and 25 German-Jewish students gained visas and traveled to Thalhimer’s Hyde Farmlands in Burkeville.

“Werner Angress was one of the last to arrive in Burkeville,” Gillette stated. “He was overjoyed to reunite with his Gross Breesen classmates.”

The students worked hard together on the farm in Burkeville, Gillette highlighted.

“Neighbors admired their work ethic and skills, and they welcomed them,” Gillette stated. “They taught them the ways of Virginia farm life.”

Though they knew how lucky they were to be rescued, the young refugees suffered from the fear that they would never again hear from their family and friends left behind in Germany, Gillette said.

He later noted that the farm thrived, but it could not sustain itself economically, Thalhimer suffered from severe heart disease, and no more refugee students were allowed into the country. The difficult and reluctant decision was made to close the farm in the spring of 1941.

“All the students had places to go,” Gillette stated. “Werner Angress joined the army, the 116th Infantry Regiment of the 29th Virginia National Guard Division. His fellow soldiers were from the farms and mills of Central Virginia, particularly Lynchburg and Bedford.”

Angress became an intelligence officer due to his ability to speak German and his knowledge of German culture, Gillette cited. He was going to be excluded from the assault on D-Day due lack of parachute training, but he went over the head of his commanding officer to Gen. James Gavin, pleading to let him go, and Angress’ courage and loyalty impressed Gavin. Angress was, indeed, allowed to jump on D-Day, and he landed safely.

“Soon after, he was captured by the Germans and then freed by the advancing U.S. force,” Gillette stated.

Angress fought in the Battle of the Bulge, which proved to be the most difficult eight weeks of his career as a soldier, Gillette noted.

“All through the war, he encountered his friends from Gross Breesen and Thalhimer’s farm who had joined the army,” Gillette stated. “In May 1945, he received permission from Gen. Gavin to return to Holland to look for his family. He did not know if they were alive.

“On Mother’s Day, he found the Amsterdam house where he left his family five years earlier,” Gillette continued. “Answering his knock, an elderly man opened the door and immediately asked, ‘Are you Werner Angress?’ Werner was dumbstruck; how did the man know his name?

“Out of the shadows, (Angress’) mother and two brothers appeared,” Gillette continued. “They had survived the war through the efforts of the Dutch underground. His father had been murdered in Auschwitz. His mother was emaciated.

“The four hugged and wept,” Gillette said. “The war was over. The agony of separation and never knowing if his family (had) survived (had) forever haunted him. Werner felt he had lived through a storm, perilously balancing between fear and hope, but in the end, he witnessed a miracle. Soon the Angress family would start a new life in America.”

Concluding his keynote address, Gillette said, “On this Veterans Day, this Armistice Day, the stories of the rescue of German Jewish teenagers to a Burkeville, Virginia, farm by William B. Thalhimer and the heroism of Staff Sergeant Werner Angress remind us that every individual is sacred and can make a difference for good. Angress and Thalhimer, they urge us to have faith in our American democracy, particularly in these challenging times, that with hope and courage and resilience, we all will prevail.”

Veterans and their families were invited to attend a reception at Red Door 104 after the program.

For the past nine years, the Farmville Police Department has participated in Operation Blue Christmas — a program that provides... read more