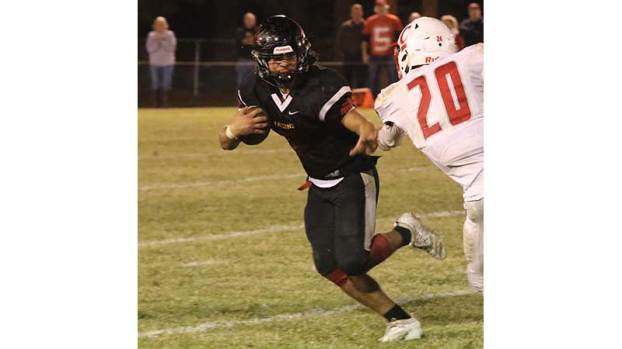 Coach’s game notes: The Falcons ended up losing their No. 1 ranking to Roanoke Catholic School in Division III of the Virginia Independent Schools Athletic Association, but Fuqua still gets to play at home in this state semifinal game.

The Warriors’ only loss of the season came Sept. 20 at Fuqua when the Falcons engineered a dramatic comeback in the second half and then held off a late rally for the narrow win.

To avoid needing a come-from-behind effort, Fuqua will aim to protect the football and not give the Warriors good field position. The Falcons had a couple turnovers early in the regular season game that gave St. Michael a really short field.

If the Falcons did not take St. Michael as seriously as they should have the first time, they are not planning on repeating that mistake.

In analyzing recent game film on the Warriors, the goal is to see who is healthy and if they are trying anything new. They are not doing much differently on offense.

They try to favor the run, but their quarterback, senior Jalen Smith, can throw the ball well, and he has a couple of targets who can catch and run well.

Catching multiple touchdowns against the Falcons before was junior Shymarr Wright. Some of the plays were kind of lucky, but the point where hard work and opportunity meet is where you find luck.

On defense, St. Michael kind of looks like it is playing around with a couple of different fronts and different personnel packages, so it is unclear exactly what it will show Friday, but Smith will be a key, roaming force in the secondary, reading Fuqua’s formations.

Coaches’ game notes: The Dukes will likely need a victory in this game against the Eagles to have a chance at qualifying for the Region 1B playoffs.

In this rivalry, Cumberland Head Coach Howard Paras switches back to the Dukes’ side, which he occupied for years as an assistant coach. Last year, he was the offensive coordinator for the Eagles, giving him familiarity with some of their players’ tendencies, which is always helpful in a game like this one.

Prince Edward has a lot of weapons, posing a challenge to Cumberland. Eagles sophomore quarterback Nate Reed is who makes it all go, but also tough to deal with are junior running back Saybien Peterson and senior running back Justin Sprague.

The Eagles’ analysis of the Dukes notes a group that is not a bad team, even if they are winless. Additionally, Cumberland always plays Prince Edward tough, regardless of the teams’ records, and the Eagles are not expecting anything different Friday.

Dukes sophomore Kyler Gilliam, senior DaJuan Brown and senior Jordan Newman will be players the Eagles will aim to contain.

Coach’s game notes: This game will be a battle between teams that are ranked second in their respective regions. The Knights need a win against Nottoway to ensure that they hold the No. 2 spot in Region 2B, which would give them home games through the first two rounds of the playoffs.

The Cougars are a solid team on both sides of the ball. Helping make them that way are seniors Brandon Lawson and Jordan Hurte. On defense, Lawson and Hurte star as linebackers, and on offense, they drew all-district acclaim last year as an offensive lineman and running back, respectively. The Cougars favor the run on offense.

Dukes fall to Raiders but see youthful potential for the future