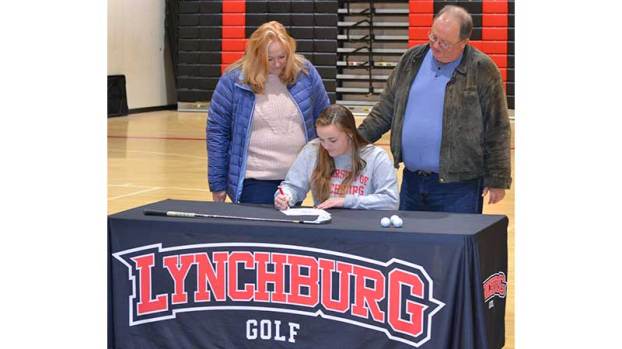 Fuqua School senior Emily Erickson signs her letter of intent to play golf at the University of Lynchburg during a recent ceremony at Fuqua, as her mother, Aprille Erickson, left, and her father, Rick Erickson, look on. (Photo courtesy of Christy Murphy)

Erickson to golf for Lynchburg Hornets

Fuqua School senior Emily Erickson formally announced her intention to take her golf talents to the next level when she signed to play for the University of Lynchburg during a recent ceremony at Fuqua.

The event included family, friends and coaches, and it is one that had been in her mind for some time.

“I’ve been dreaming about this day ever since I made it my goal to play college golf, and finally the day came, and it meant a lot,” she said.

She noted that she had made it her goal right after she started playing.

“So I started when I was 7, so I probably had the goal for about at least nine or 10 years,” she said.

As it turns out, Erickson was a trailblazer on the links in her family.

“All this effort really is to Emily’s credit,” said her father, Rick Erickson. “All I did was drive her to the golf course, but she was the one that learned how to golf, because she’s the only one in the family that golfs.”

He noted that the one who taught her how to golf was former Longwood University Women’s Golf Head Coach Ali Wright, who consistently came out to the course to give her guidance.

In addition to playing for Fuqua, Emily Erickson has gained playing experience through her participation with the Piedmont Junior Golf Association and with the College Prep Golf Tour (CPGT).

Describing what the CPGT offers, she said, “They’re two-day tournaments. And the last one I played, it was actually right after I had verbally committed. I played down in Williamsburg at Kingsmill, and I won by a stroke there. The college coaches were there, so it was actually kind of cool to do that.”

Rick Erickson explained that prior to any commitment or even any introductions, University of Lynchburg Hornets coaches had taken great interest in Emily and her performances in the tournaments.

“Emily was competing in a big tournament up in the Richmond area, and their two coaches — their men’s coach and their women’s coach — on a tip from somebody else came up and watched her play,” he said. “We didn’t even know who they were at the time. And at the end of the tournament, they came over, introduced themselves and — this was a year ago — invited us to come tour the college. And anyway, we took them up on it.

“Over the rest of earlier this year and the rest of her tournaments, they were either there or monitored stuff,” he continued. “The people at Lynchburg were just super. They were just excellent people, and Emily could have gone to college a lot of places, but just with the way these people were … and we love the school, it’s in a great place, it’s only an hour away and all that.”

Emily Erickson noted that, indeed, Lynchburg made her college selection process quite easy.

“Once Lynchburg came and talked to me about joining the goal team, I really connected well with the coaches, and I went to tour campus multiple times just to see if it was the right fit for me, and I fell in love with campus and their athletic program and their goals,” she said. “Honestly, after Lyncburg contacted me, I kind of stopped looking because I knew that’s where I needed to be.”

She aims to be representing the Hornets in formal competition during her freshman year.

“The women’s golf program just started back up this year, actually,” she said. “So right now, they have five girls on the team, and with my class there’s going to be five more, and they take the top five to tournaments, so it’s very possible that I could be starting next year. It’s my goal to start next year.”

She also has a plan on the academic side of things.

“Right now I’m planning on majoring in business marketing with a minor in either sports management or consumer psychology,” she said.

Reflecting on Emily’s signing and speaking on behalf of himself and her mother, Aprille Erickson, Rick Erickson said, “We’re really happy with this and her accomplishments and her scholastic abilities as well.”