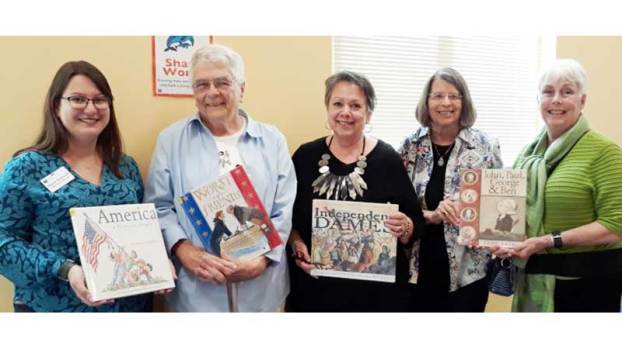 On or around Oct. 11, chapters of the National Society Daughters of the American Revolution (DAR) throughout the United States and abroad were observing days of service to neighborhoods and community organizations. Although DAR Chapters contribute time and financial resources in many ways throughout the year, Oct. 11 is a special day for the organization, for it was founded Oct. 11, 1890. As Eugenia Washington, one of its founders, stated at one of those early organizing meetings, “We want a society founded on service.” And serve it has in innumerable ways throughout its 129 year existence.

Closer to home, members of the local Judith Randolph-Longwood Chapter DAR pitched in to do to support the citizens of Farmville and its surrounding counties. The local Day of Service Committee, chaired by Rebecca Maxwell and joined by committee members Sarah Stokes and Myra Green, met throughout late August and early September to devise the Chapter’s local Day of Service plan. The committee’s two-pronged proposal for service to our community met with overwhelming approval by the Chapter at its September meeting.

The plan included the purchase of three children’s books featuring stories from the American Revolution for the Barbara Rose Johns Farmville-Prince Edward Community Library. Although only two of the books arrived in time for the presentation to the library on Oct. 10, members gathered in the children’s room as, Judith Randolph-Longwood DAR member, Donna Bremer gave a rousing rendition of “John, Paul, George and Ben” from the library’s collection to several spellbound children. Rick Ewing, library director and Megan Newcomb, youth services specialist, were delighted to receive the two books “America: a Patriotic Primer,” and “Worst of Friends,” with the promise of the third to arrive soon.

Meanwhile, on the same day, other members gathered in the library’s meeting room to begin working on the second of the Chapter’s service projects spearheaded by the Day of Service Committee — packing “goody bags” for the various law enforcement groups that work so diligently to keep our communities safe. Items were placed in over 80 bags by 12 enthusiastic members: Yvonne Costello, Donna Browning, Barbara Smith, Katherine Austin, Kathryn Jenkins, Myra Green, Rebecca Maxwell, Marilyn Osborn, Dottie Fahrner, Betty Sumner, Nancy Pempel and Margaret Atkins, who recorded the event for posterity.

A card describing each bag’s contents proclaimed the following: Lifesavers, To remind you of the many times you have been one; Gum, To help you all stick together; Starbursts, To give you a burst of energy when needed; Peppermint Patty, To help you keep your cool; Nabs, To help you nab the bad guys; Chex Mix, To remind you of the diverse population you serve; Granola Bar, To give you the energy you need; and an Apple, An apple a day keeps the doctor away. Another card was attached to the bag expressing the Judith Randolph-Longwood DAR’s profound gratitude to the members of Law Enforcement for the diligence, courage, and helpfulness they exhibit in their jobs every day. Leftovers goodies were donated to the library staff, in appreciation of their support for the Chapter’s efforts.

On Oct. 11, the “official” Day of Service, Judith Randolph-Longwood DAR members gathered in the ground floor of the town hall to deliver the bags to representatives of the Farmville Police and the Prince Edward County Sheriff’s Department. After this presentation, bags were also taken to the Longwood Police Department in appreciation of the role it plays in keeping the Longwood Community safe.

The Judith Randolph-Longwood Chapter is a vital cog in the network of DAR Chapters crisscrossing Virginia and the United States. For more information about the Chapter contact the registrar, Kay Whitfield via email at kaywhitf@icloud.com or the membership chairman, Donna Browning at dmbrowning@centurylink.net. The next meeting of the Chapter will be Nov. 9, at 10 a.m. in the community library meeting room. Joelle Denison, director of programs and training with the Richmond Justice Initiative, will discuss problems associated with human trafficking.

In the early morning hours of Nov. 4, a single suspect forced entry into the Attic Pawn Shop located in... read more