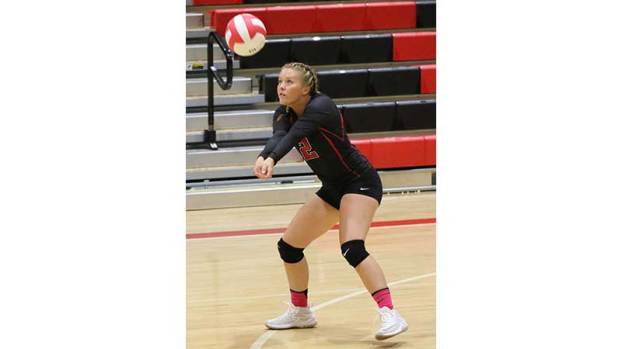 A solid ending to a turnaround season

Fuqua School’s varsity girls volleyball team did not advance beyond its conference tournament for the 2019 season, but the Lady Falcons nevertheless went out with a tremendous performance in the first round against host Roanoke Catholic School, showcasing a key ingredient in what helped them pile up more wins in the second half of the year.

After starting the season 3-6, Fuqua’s final overall record for the season was 8-11.

“We really turned it around,” Lady Falcons Head Coach Jamey Morris said. “We had a little bit of a sluggish start, and the girls had a lot of spirit and a lot of scrap going down towards the end.”

The only major stumble as of late, that the coach noted, was a 3-1 loss to host Virginia Episcopal School on Oct. 8.

“I was disappointed in losing to Virginia Episcopal,” he said. “They were one of the lower-ranked teams in our division, but it’s just one of those things. It’s sports — that’s how it goes sometimes. But (the Lady Falcons) played really well against Roanoke Catholic even though we lost.”

The final match score against Roanoke Catholic was 3-1.

“A loss is a loss, but man, at least they gave it their all,” Morris said. “We were right there. The score in a couple of those games didn’t really dictate how we played, but we beat them the first game, and the gym got real quiet on their end. And we just had a couple of mistakes, and they just pulled ahead of us, but anyway, they played well at the end.”

Reflecting on individual standouts for the season, the coach highlighted his team captains.

“Carmen Reynolds and Abbie Schmidt and Lexy Tharpe — they all did a really good job,” he said. “We tried to keep everything positive. We tried to not use the words ‘I’ and ‘You need to do this.’ It’s a ‘we’ sport, and we really tried to work together as a team. So, those girls, my captains, were key in some of that, really keeping positive and really trying to keep the girls going in a positive direction.”

Reynolds, a senior, was an outstanding all-around player, the coach indicated. Schmidt, also a senior, shined as a setter/hitter, and Tharpe, a junior, stood out as her team’s libero.

Morris said he is looking forward to next year.

“I see some potential next year,” he said. “This is my first year with the girls, and I really want to work with them offseason, going to some camps and just working with them and keeping them involved. I know I’ve got some girls doing travel ball, and that’s going to help them out.

“A lot of my girls, they play volleyball August to October, and then they don’t touch a ball at all,” he continued, “and I’m trying to build a program, and I want to keep them involved … not every weekend or every day or anything, but at least keep them touching the ball through the winter, whether it’s passing or serving or whatever they’re doing.”

Buckingham County High School’s varsity football team scored on the ground, through the air and via special teams to take... read more