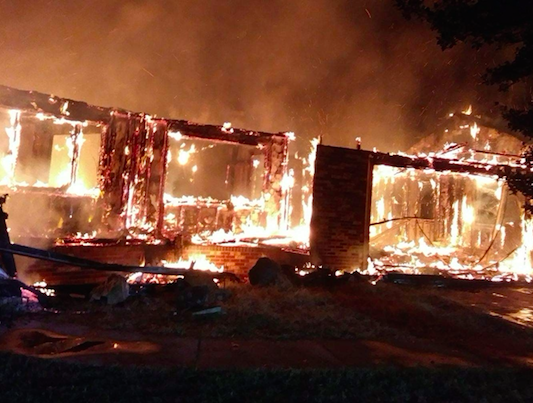 Meherrin Volunteer Fire and Rescue Inc. initiated a controlled burn/demolition of a house on U.S. Route 360 in Green Bay on Saturday, Nov. 2, that the department had been using for training purposes during October before Dollar General needed the property to build a new store.

Meherrin Volunteer Fire and Rescue Inc. completed valuable training exercises Saturday, Nov. 2, that the organization was able to engage in throughout October at a vacant house on U.S. Route 360 in Green Bay.

“We used the house for training, but (at) the end of the day, we went ahead and just burned it down to the ground,” he said.

The property will soon be home to a new Dollar General store.

Pyle affirmed that it is routine for Meherrin Fire and Rescue to search for structures sound enough to work as a training space.

“Absolutely,” he said. “That training is valuable.”

He said he reached out to the development group that is going to be building the Dollar General store to see if the department could use it prior to construction of the business.

“I contacted them and told them what we were looking to do since they had the property sitting there, and the house was in great shape,” he said. “And they agreed, and they signed a release for us to use it as much as we wanted to, do anything we wanted to do to it.”

Pyle highlighted some of the activities involved during training sessions at the house.

He noted that the anticipated Dollar General store construction start time in which equipment would be on the property was to be Monday, Nov. 4.

Demolition of the house was going to be on the agenda of things to do for the development group, so Meherrin Fire and Rescue ended up helping out with that.

“We told them, we said, ‘You can let us burn it, and use it for training and smoke the house up and all that,’” Pyle said. “I said, ‘If it catches on fire and it gets going real good, we’ll just let it go, and if it’s not, then there may be some parts of it standing,’ and they were fine with it either way.”

The chief said that on Nov. 2, training began at about 4 p.m., and the department’s trucks left at around 10-10:30 p.m., with the controlled burn taking up the last two to two-and-a-half hours.

The Herald updated the results from the polls in Buckingham, Cumberland and Prince Edward counties Tuesday night, Nov. 5. The... read more