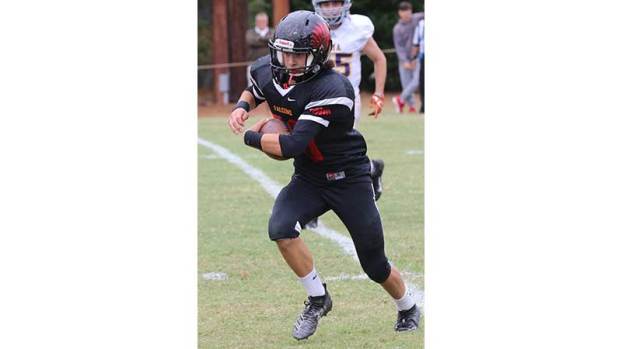 uqua School junior wing back Hayes Barton runs for a touchdown in the second half of the Falcons’ 42-14 defeat of visiting Massanutten Military Academy on Saturday afternoon. (Photo by Titus Mohler)

With the win Fuqua improves to 6-0 this season.

The Falcons did not need their starters for all of this contest against the young Colonels, and senior quarterback Elijah Warner was finishing up his SAT at the start of the game and ended up being able to take the day off, playing-wise, though he supported his team from the sideline.

“It was good to get the young guys out there,” Falcons Head Coach Ben Manis said. “At one point, we were a couple sophomores and mostly eight- and ninth-graders playing, so it was good to get them out there and just (experience) the difference in the speed so they can get ready for that as far as who’s coming up … next year. It’s always good to see the young guys that give you effort in practice, and then they get a chance to show what they can do. I really appreciate what they do in practice to make us get better for Fridays.”

As for standouts, Manis said, “This was a game that Jaylen (Hempfield), early, had a bunch of good touches.”

Hempfield, a senior wideout, finished with three catches for 53 yards and two touchdowns.